On our second to last day we decided to visit The Archaeological Site Of Kourion. An ancient Greek city on the southwestern coast of Cyprus. Now, we had a lot of expectations from this one. It was very far away from our hotel (about 100km) and our trip was almost over, so we didn’t want to get disappointed. Also, it was our last day with a car that we rented.

We decided to not waste time and go to Kourion as early as possible. We already learned the hard way from our visit to Tombs of The Kings and decided to not wait till the heat comes toasting us again (not fun at all). We ate our breakfast and, around 9 a.m., we hopped into our car and made our way to the ancient city.

After lots of air conditioning, water and staring through the window, we reached our destination. The city was on the top of the hill, so we were very excited for the view that we might see. The entrance was 4,5€ per person. Not very cheap again. But our expectations were fulfilled more than perfectly! It was a sign to see. All building or what was left of them were dated from the Hellenistic period (310 – 30 BC), Roman period (30BC – 330 AD) and Early Christian period (330 – mid 7th century AD).  There were 11 objects to see in total. 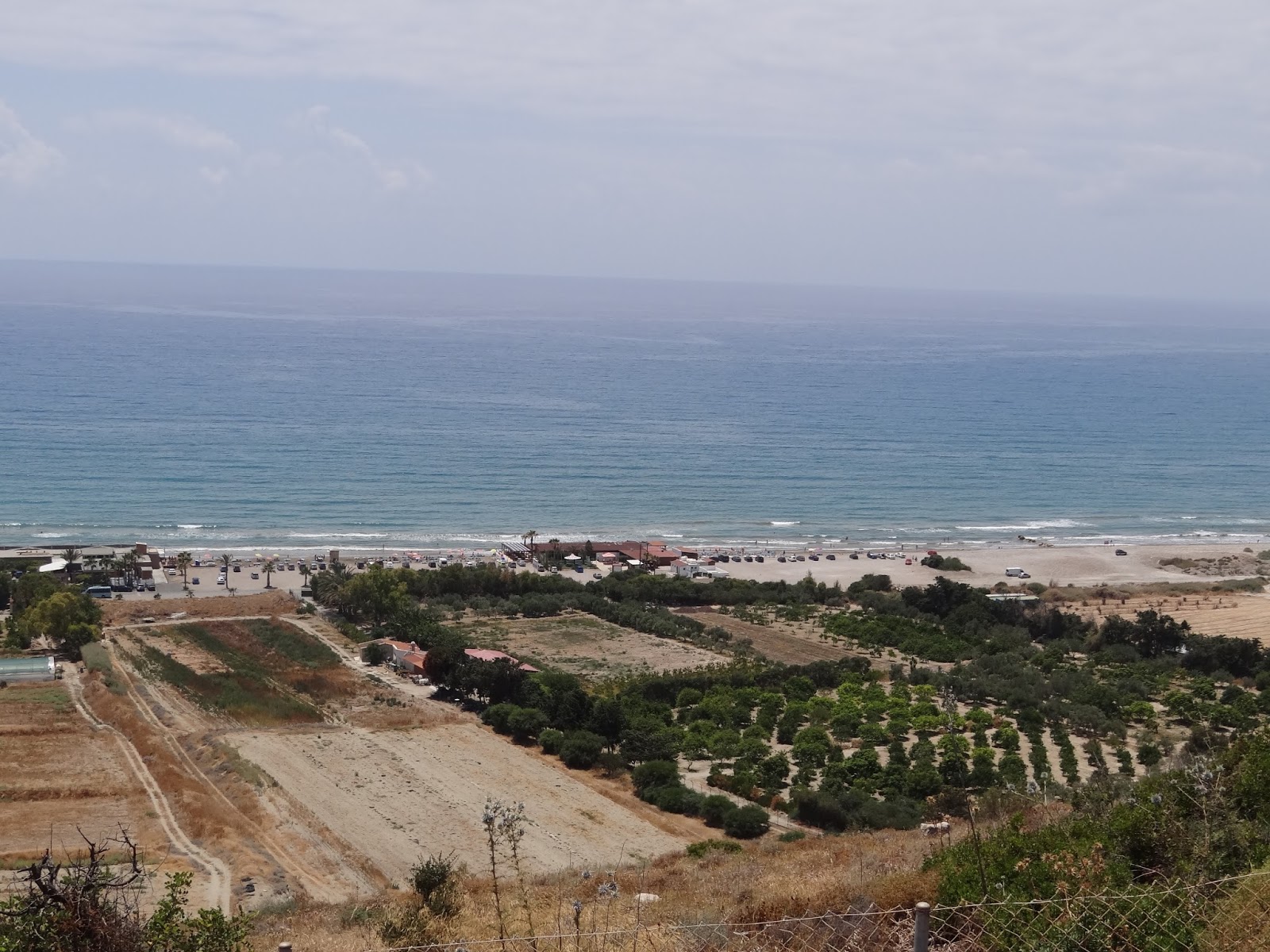 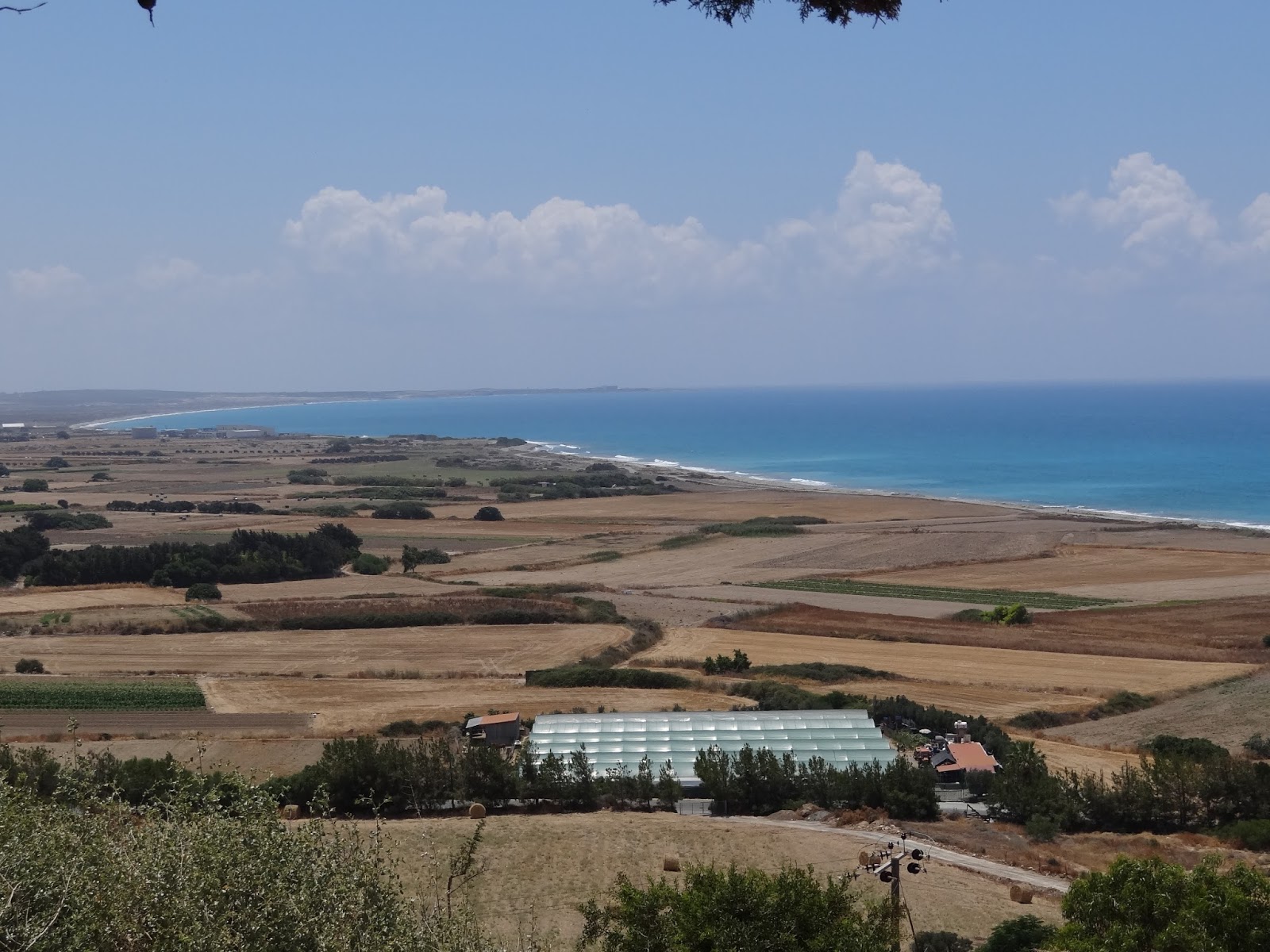 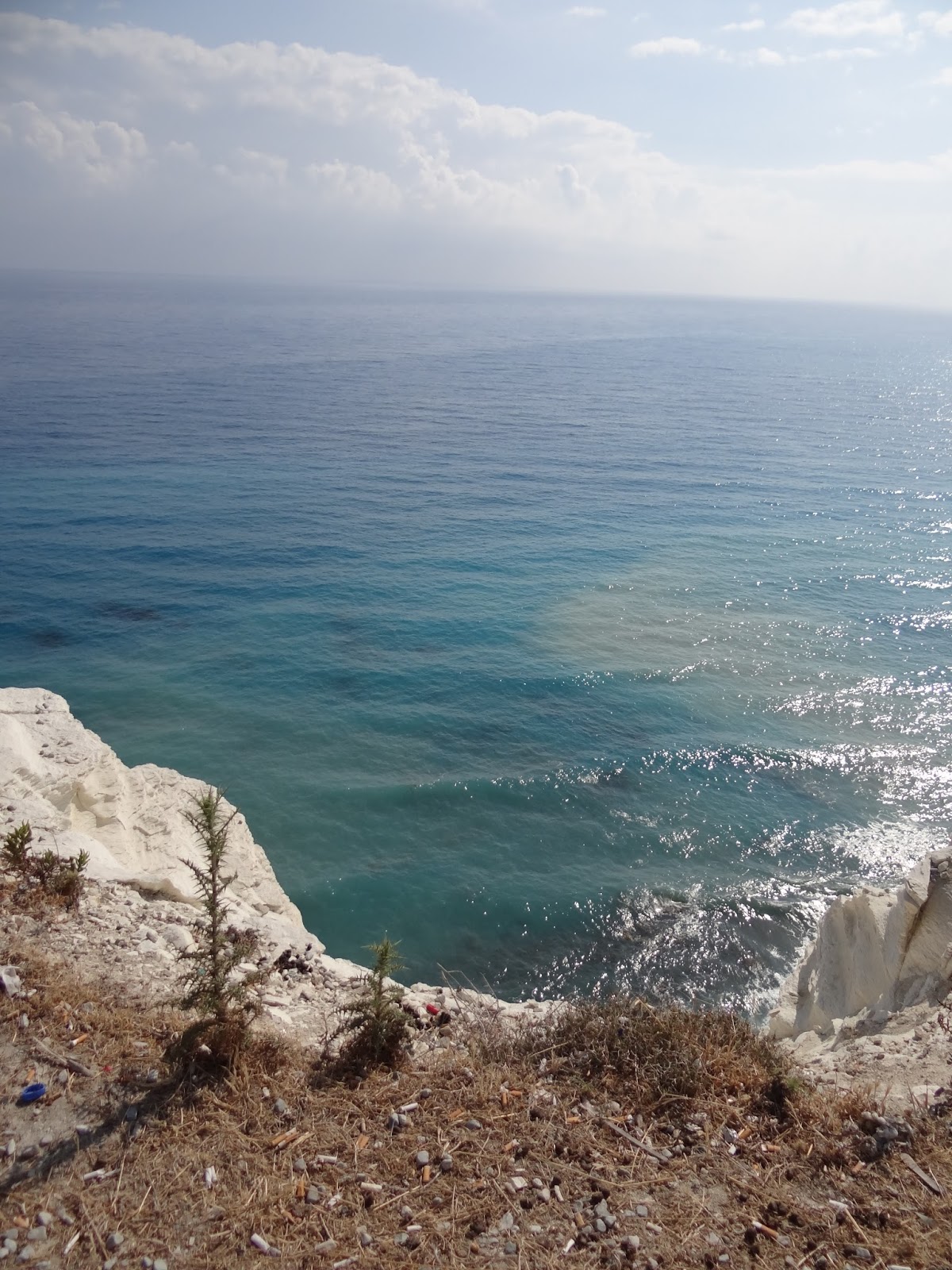 There was House of Eustolius which was build for poorer people by Eustolius himself. It was enormous! And very interesting to see and read about. Also, there were Earthquake House which was apparently destroyed by the earthquake. In that house, archaeologists found bones of a dog, 12-year-old girl and around 60 years old woman. It was very shocking, the place where they were found there drawn on the map beside the house. 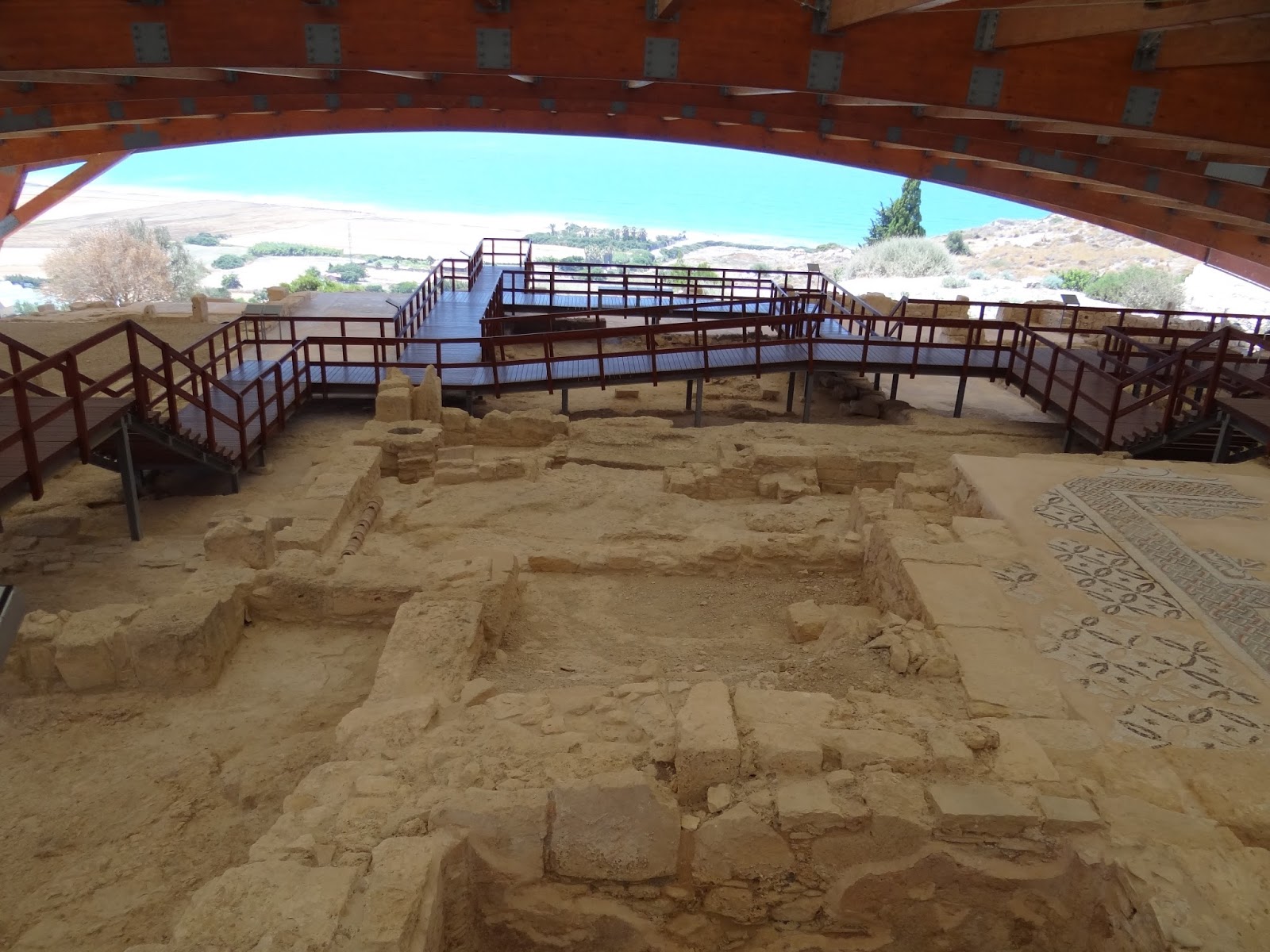 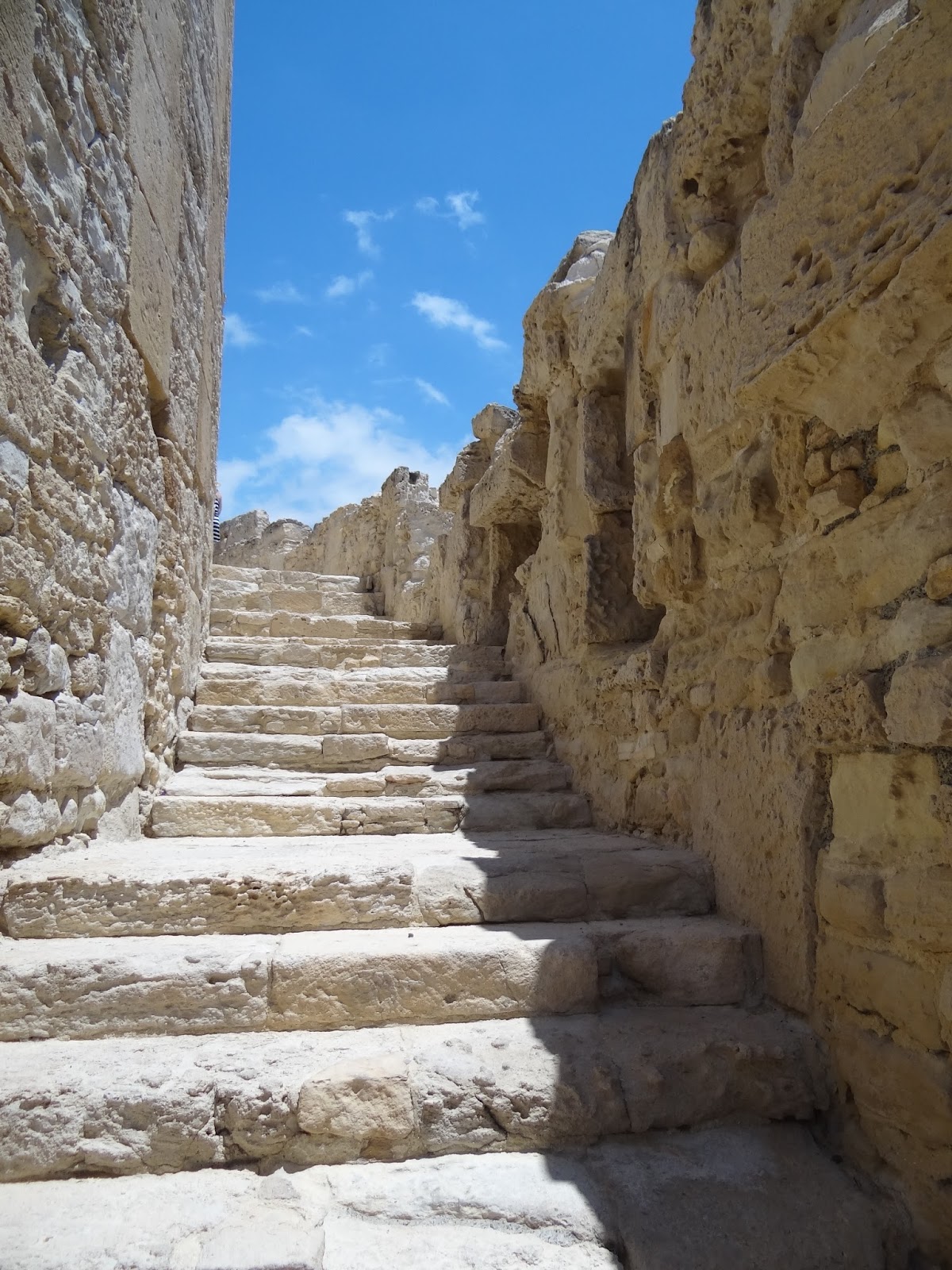 I was very excited about spectacular theater. It was the Amphitheatre! I couldn’t resist taking lots of pictures there. Also, some workers were building a stage for a play there! 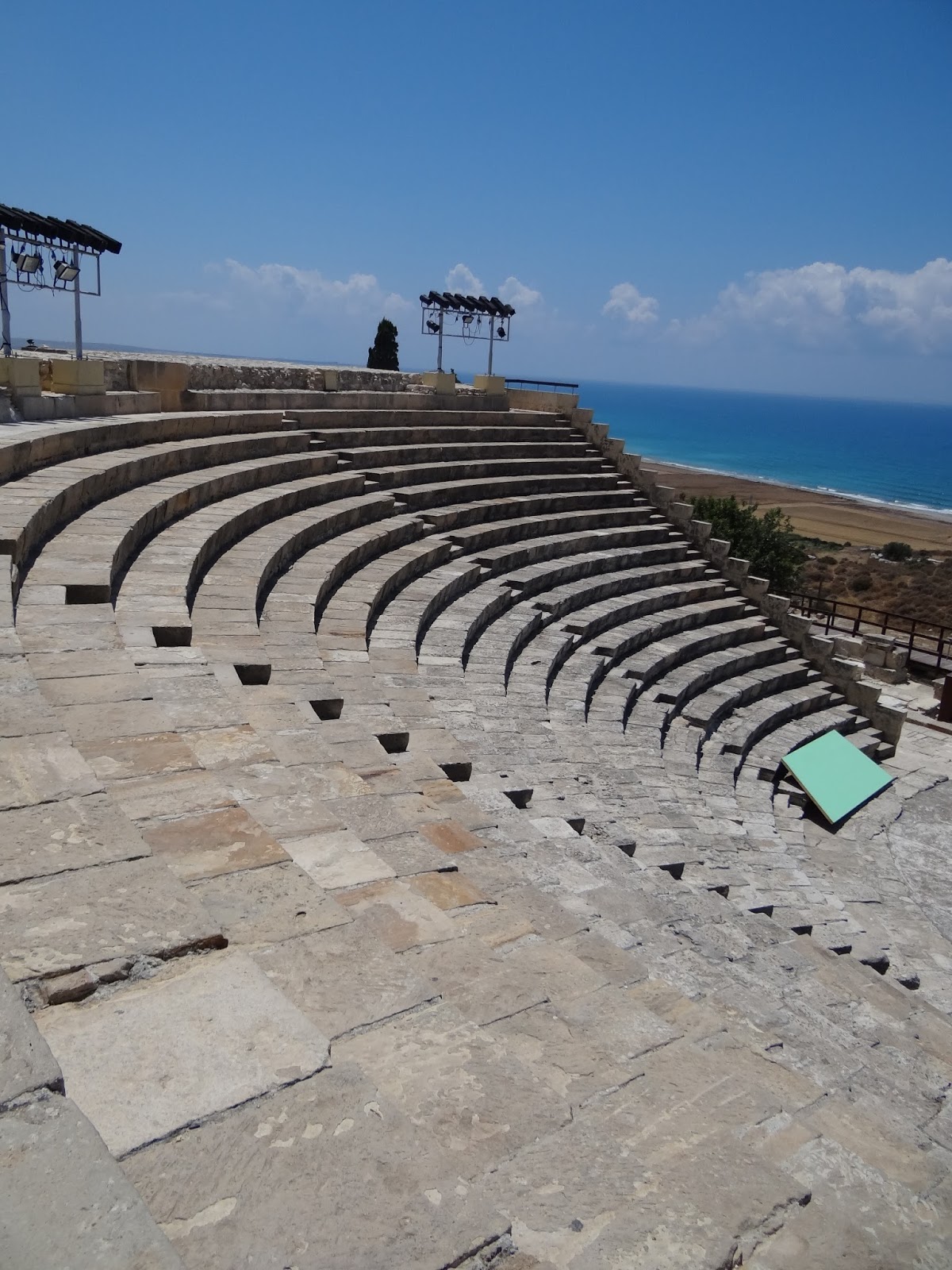 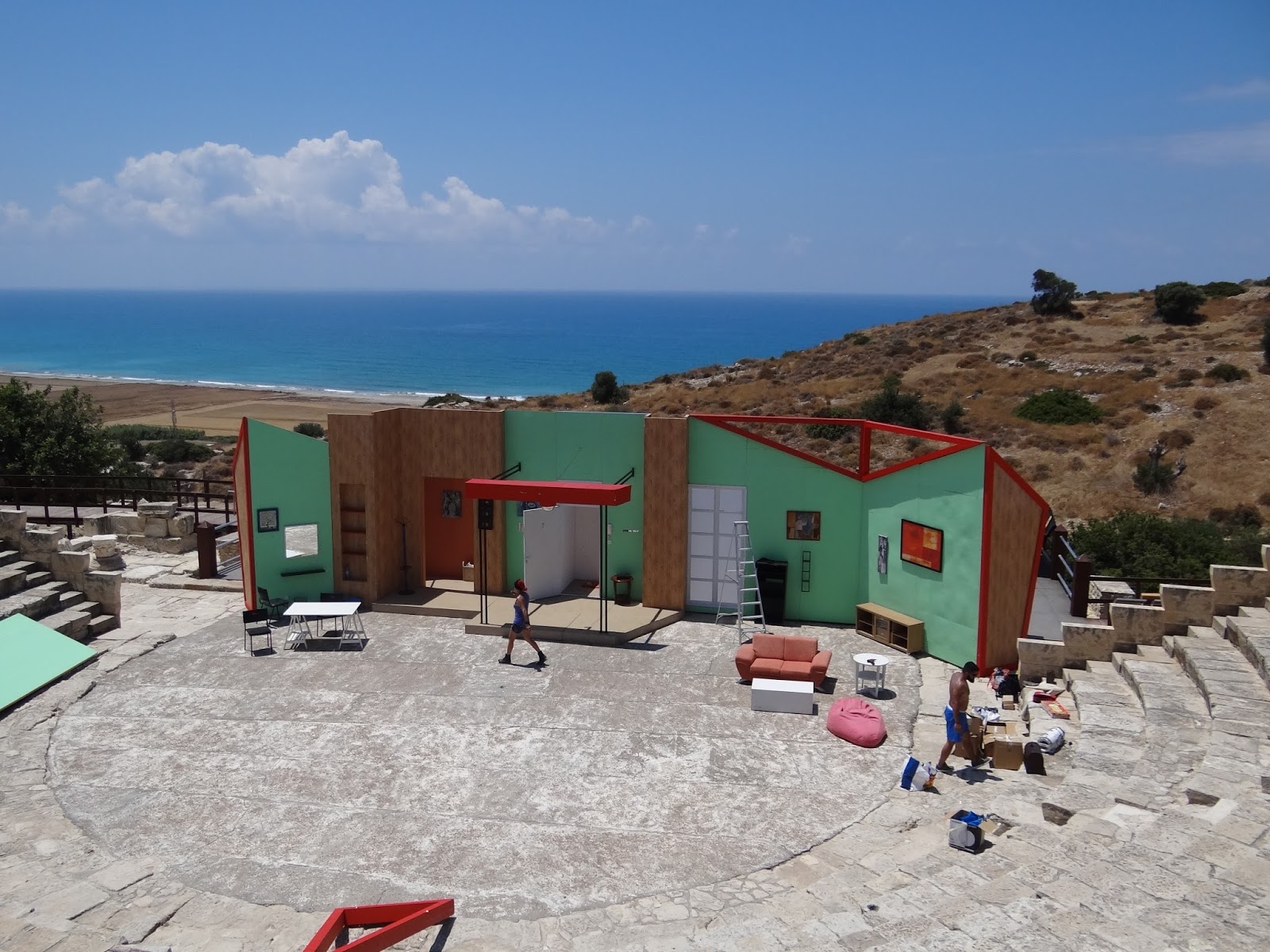 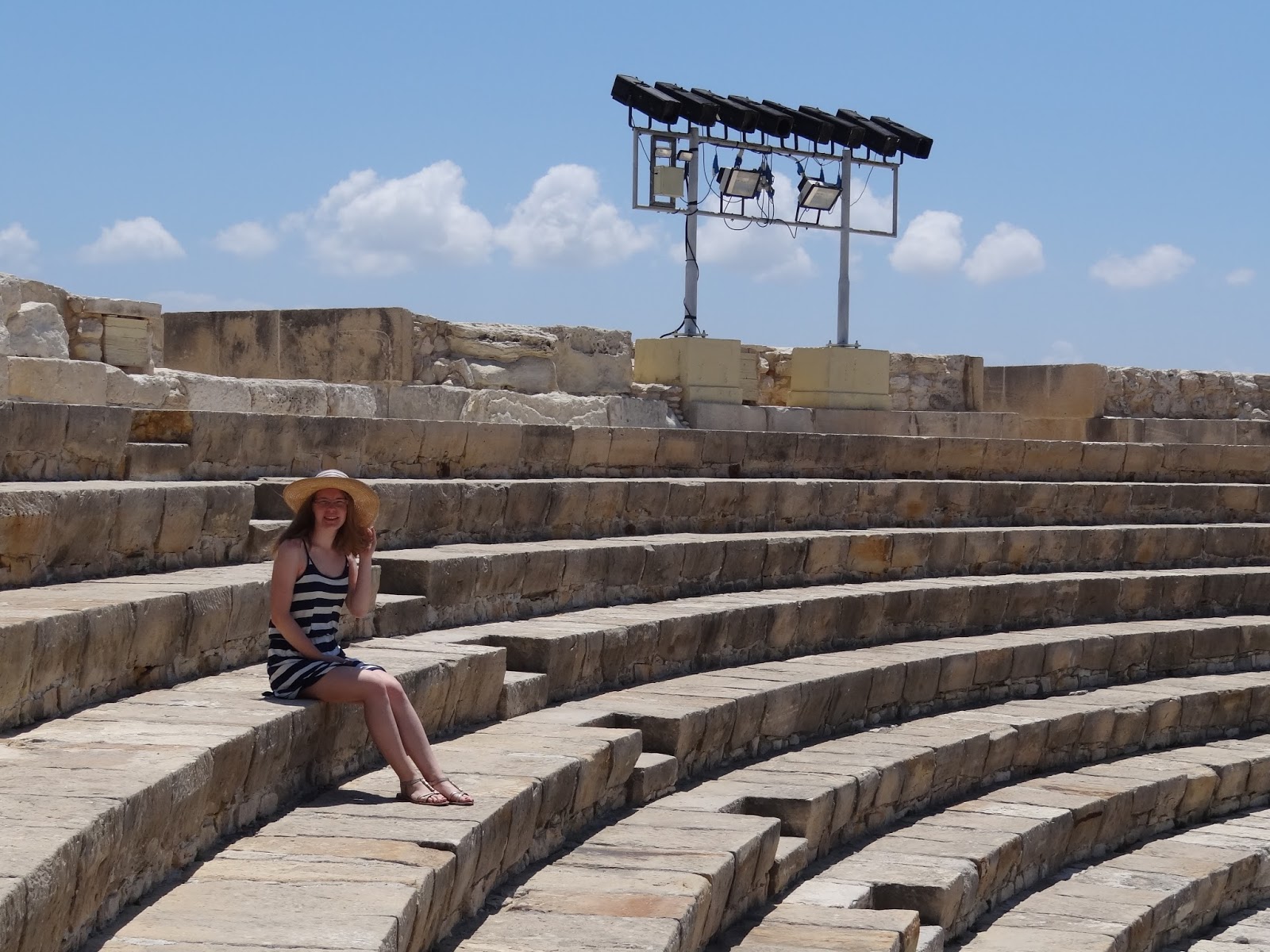 There were The Agora, The Stoa, Hellenistic public structure, Roman Nymphaeum, Early Christian house with a triclinium and more. There were lots of beautiful mosaics, ginormous baths from Roman Period (30 BC – 330 AD) and even more amazing constructions! It’s so mind blowing thinking about it. Here they are, Greeks and Cyprians, building the biggest building with baths and all perks that just scream luxury and my country didn’t even exist back then. Our first people were probably still hunting reindeer and our land was in the glacier. 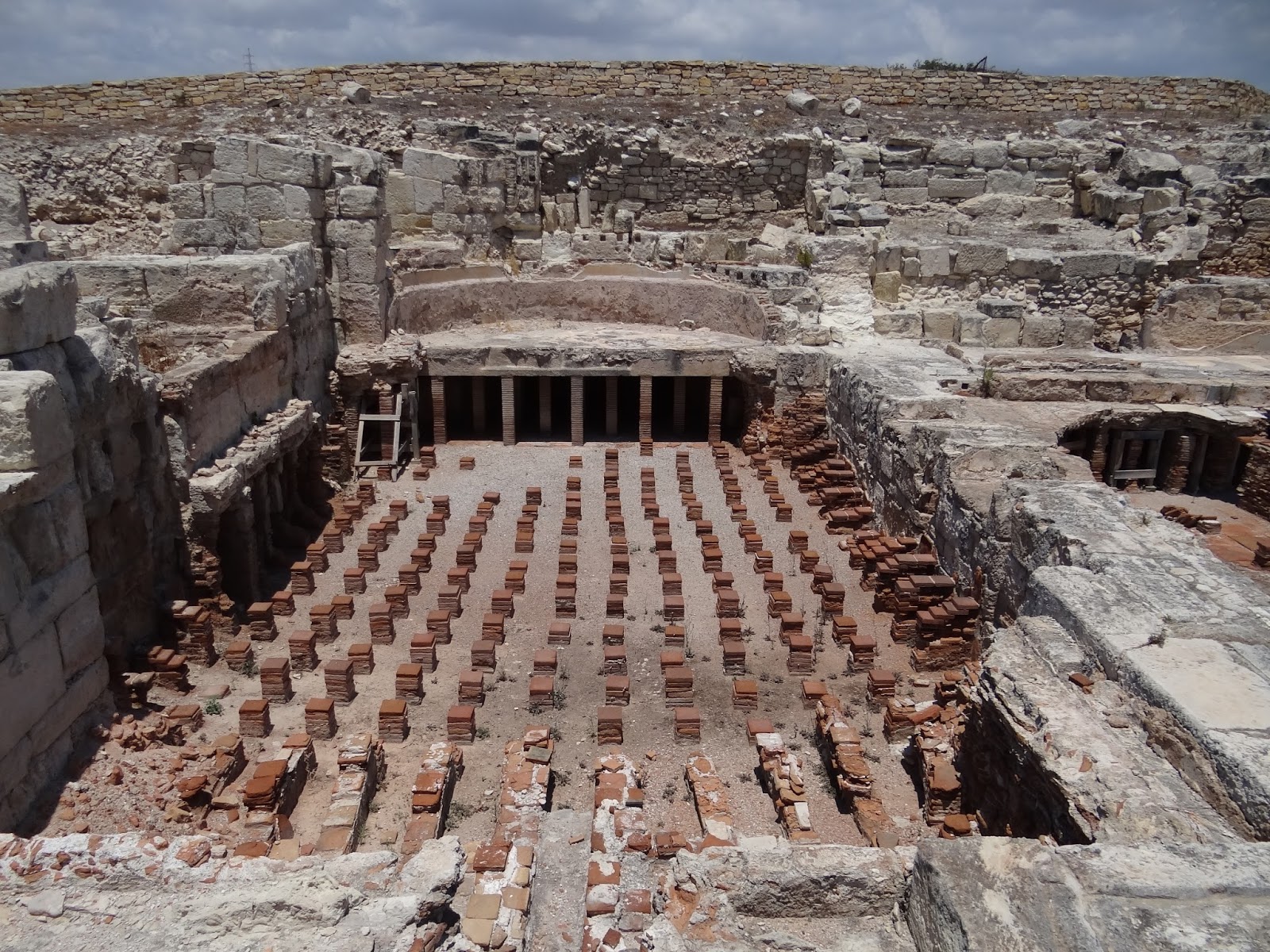 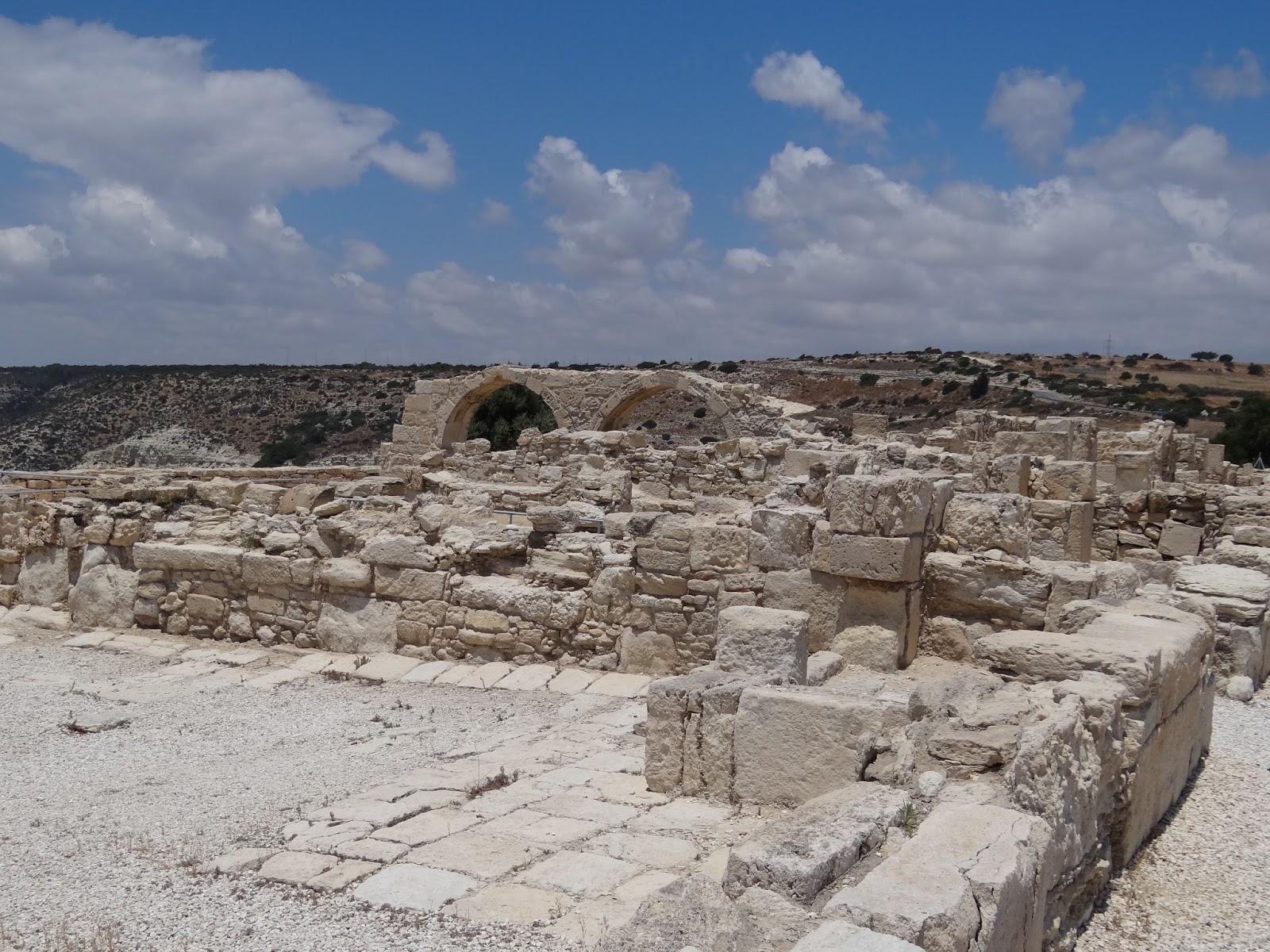 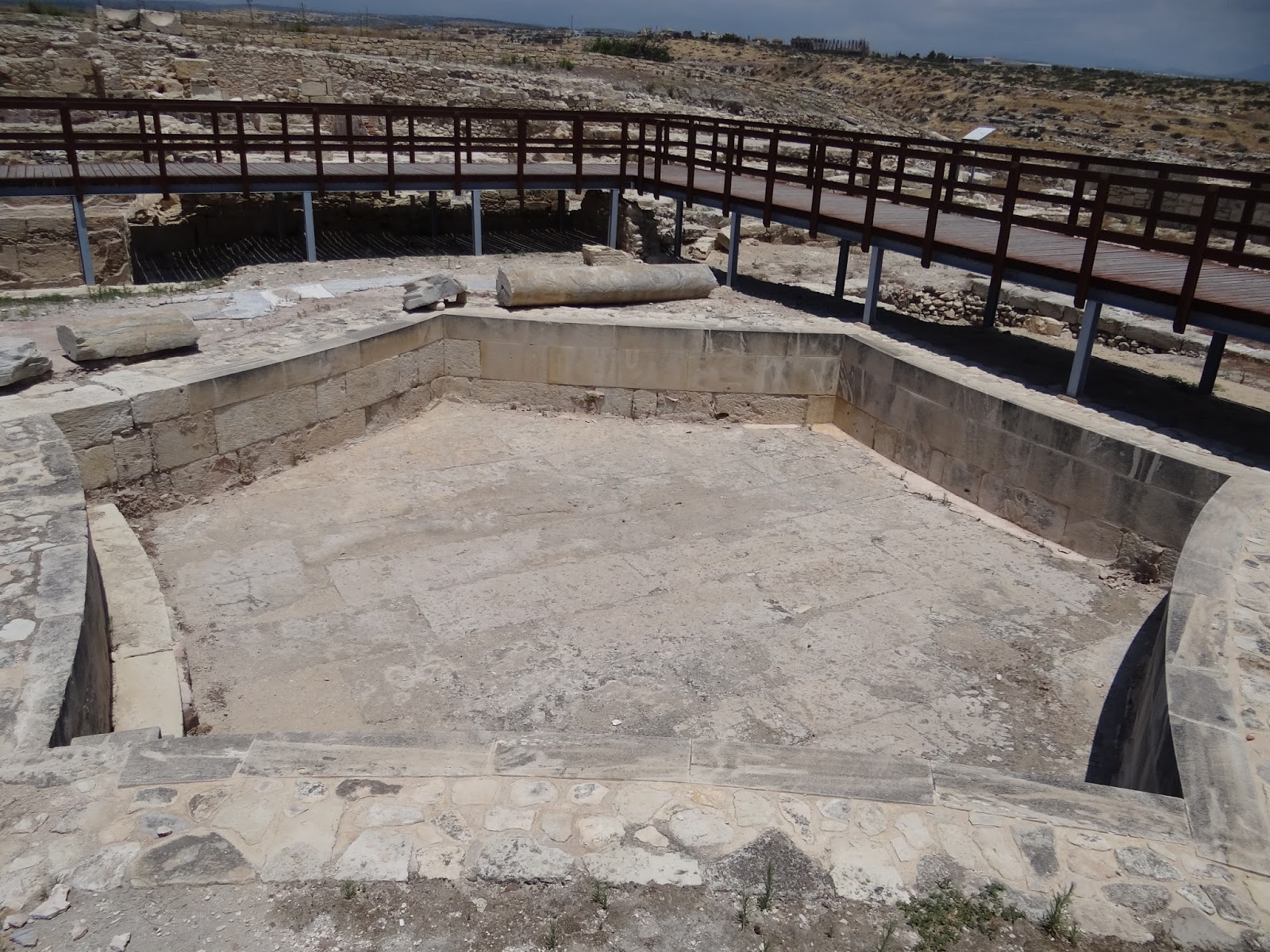 The bath. Look at the size of it!

After pitying my country and wow’ing at southerners abilities and intellect, we walked to the last two objects that we were yet to see. It was House of The Gladiators and House of Achilles. Gladiators’ house used to be a little training area for gladiators. It had wonderful mosaics as well as Achilles’ house. There was a mosaic in which Achilles’ mother dressed him up as a girl, so he wouldn’t have to go to the Trojan war. 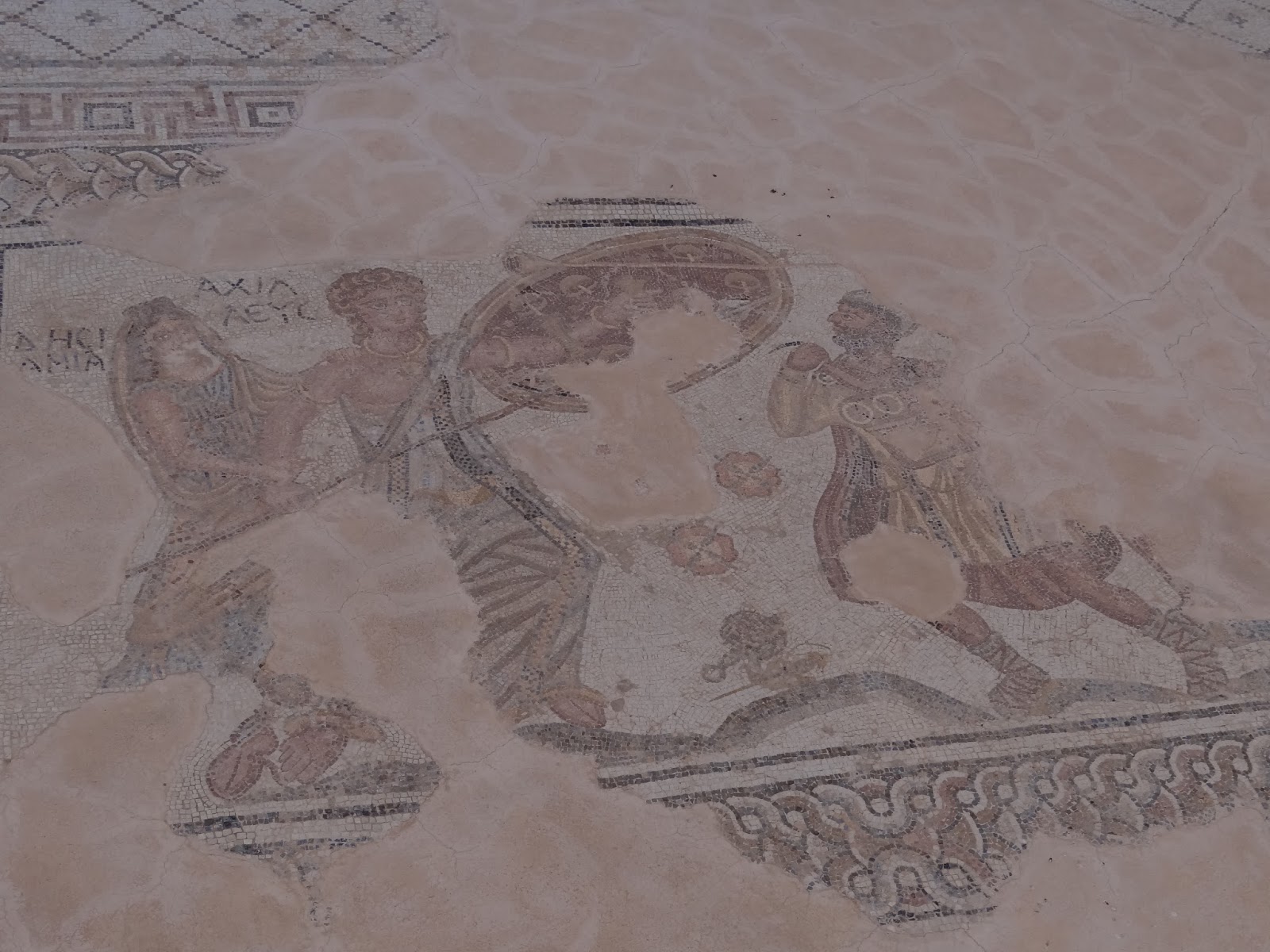 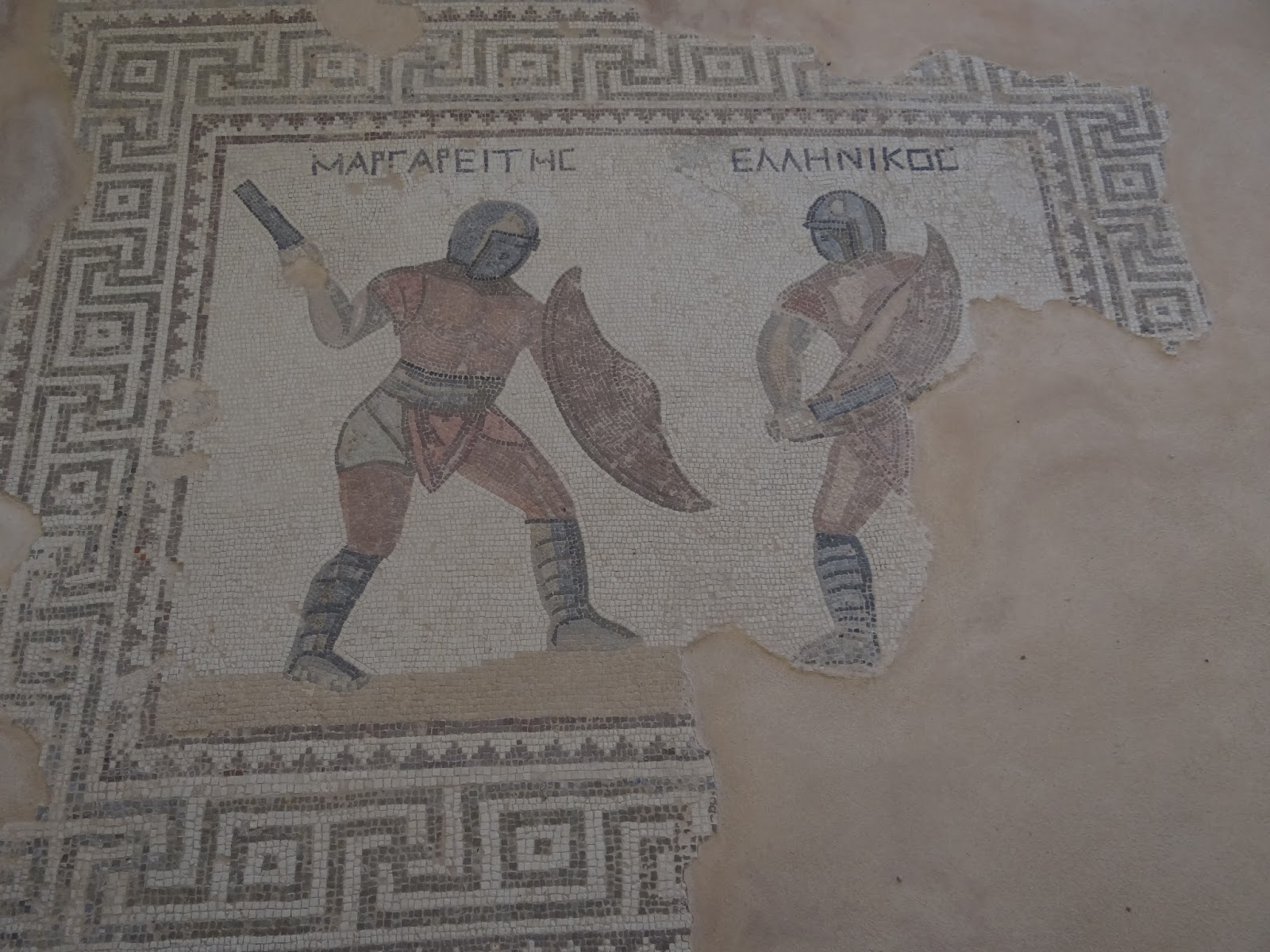 At times like this, I remember my history teacher from my school who used to talk about Greek history and all these things. Back then it wasn’t as interesting and there was always a thought in my head ‘It doesn’t matter, it happened a LONG time ago and yada yada’. But now seeing all these ruins of building, mosaics, baths it makes me realise that I was very wrong. It seems like it happened very long ago but, in reality, it isn’t. And I feel very lucky to be able to travel and explore places like that. They actually make you realise how small you are and how the world changed in 1000 years. 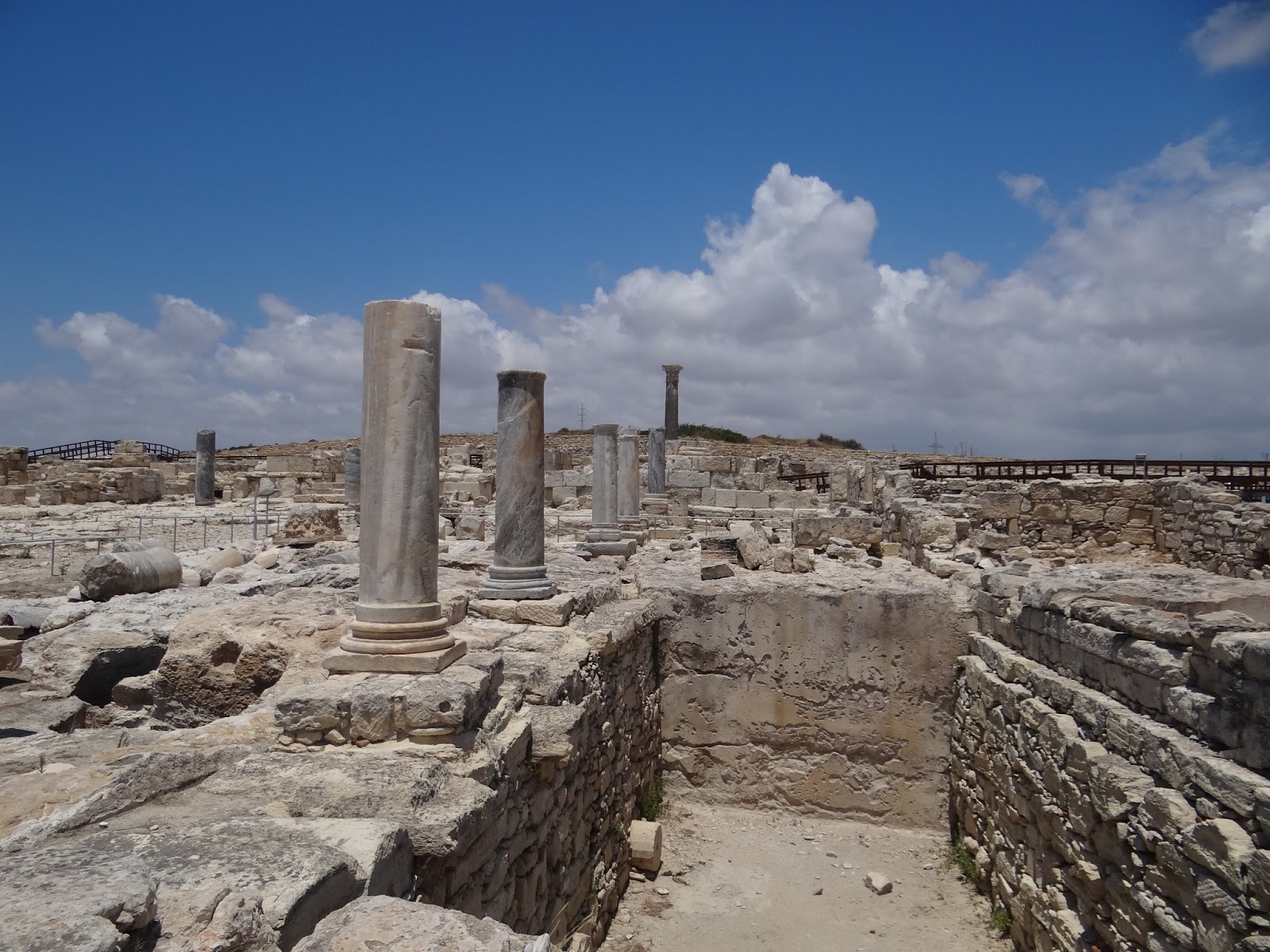 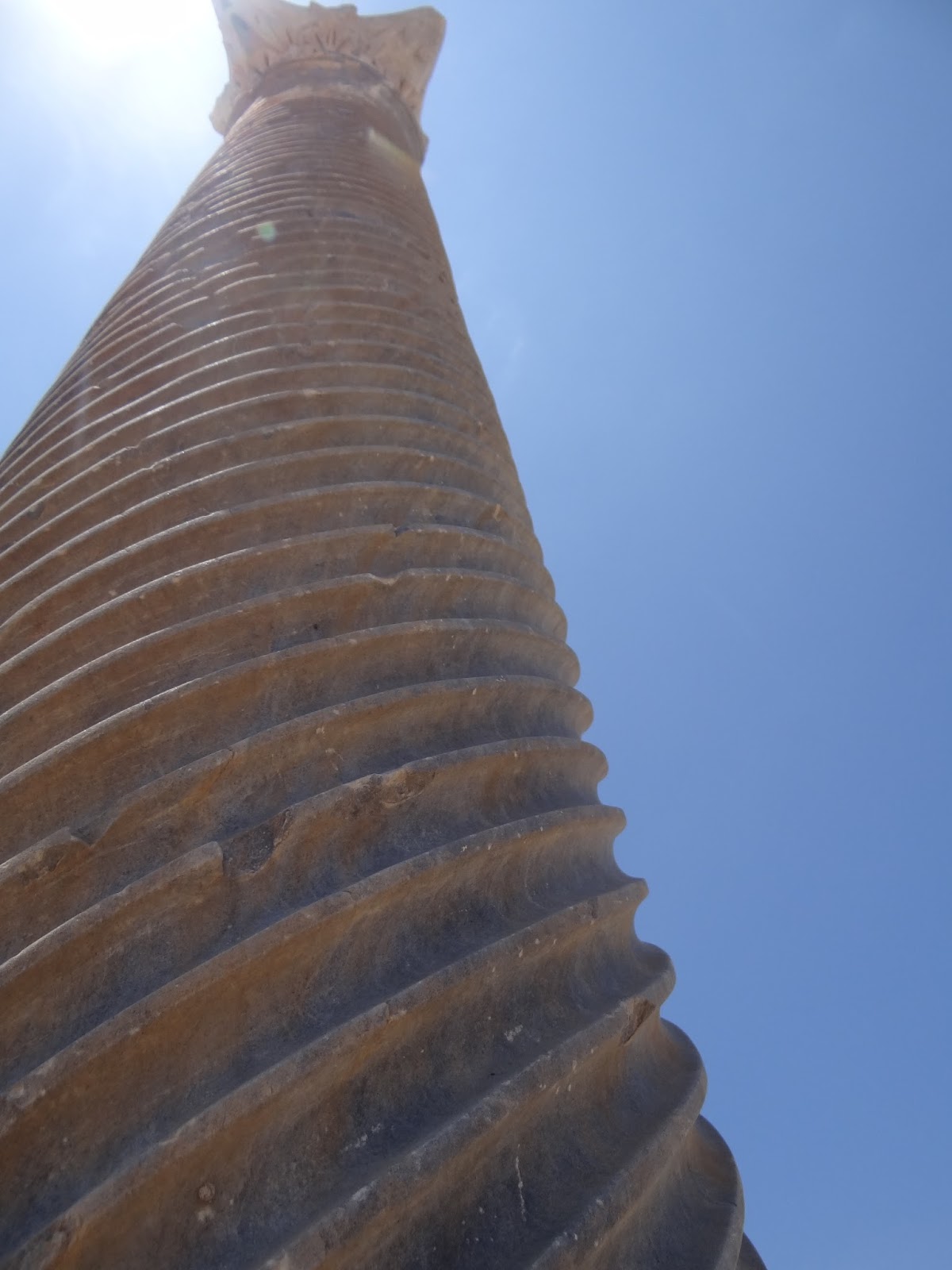 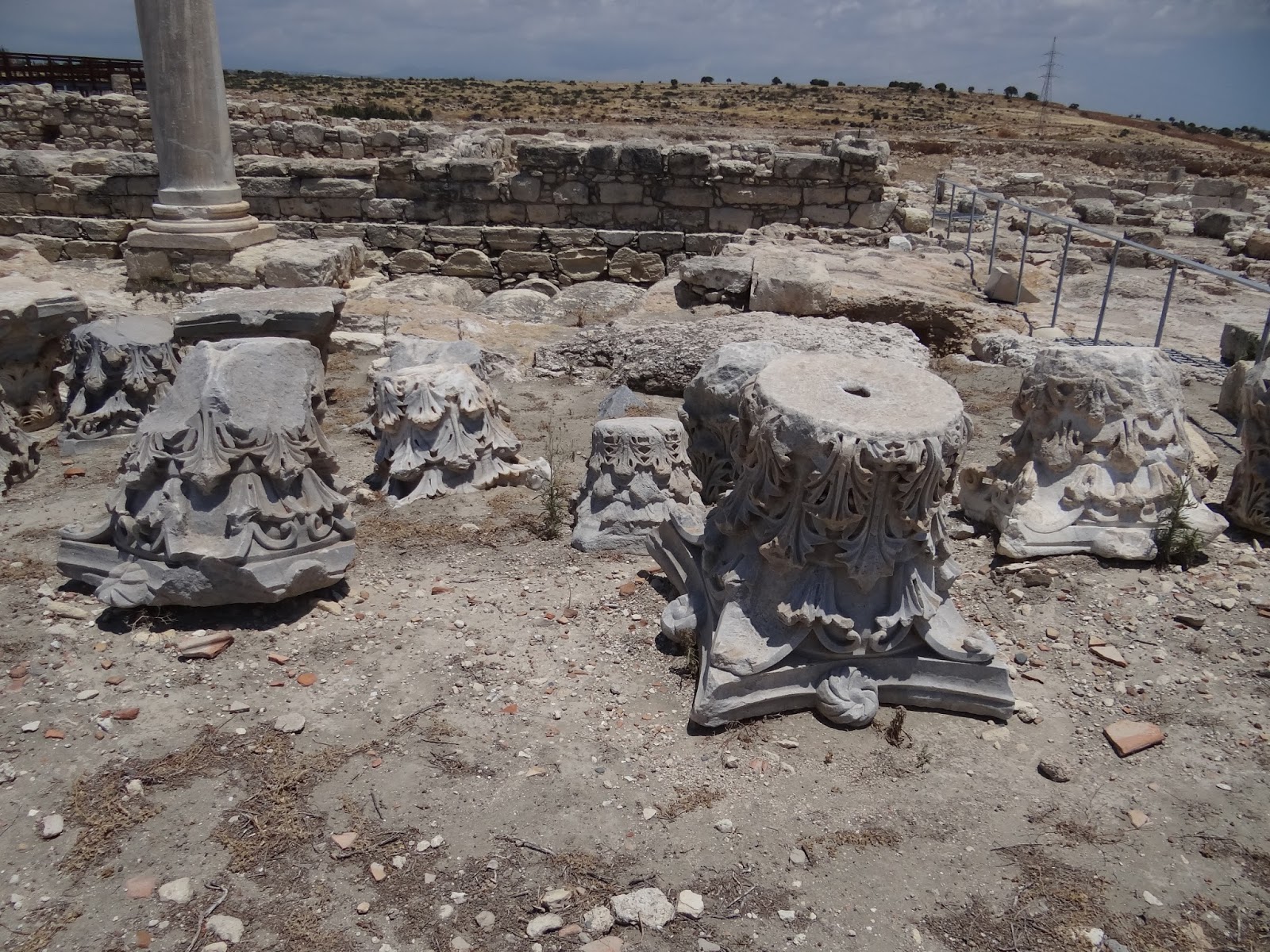 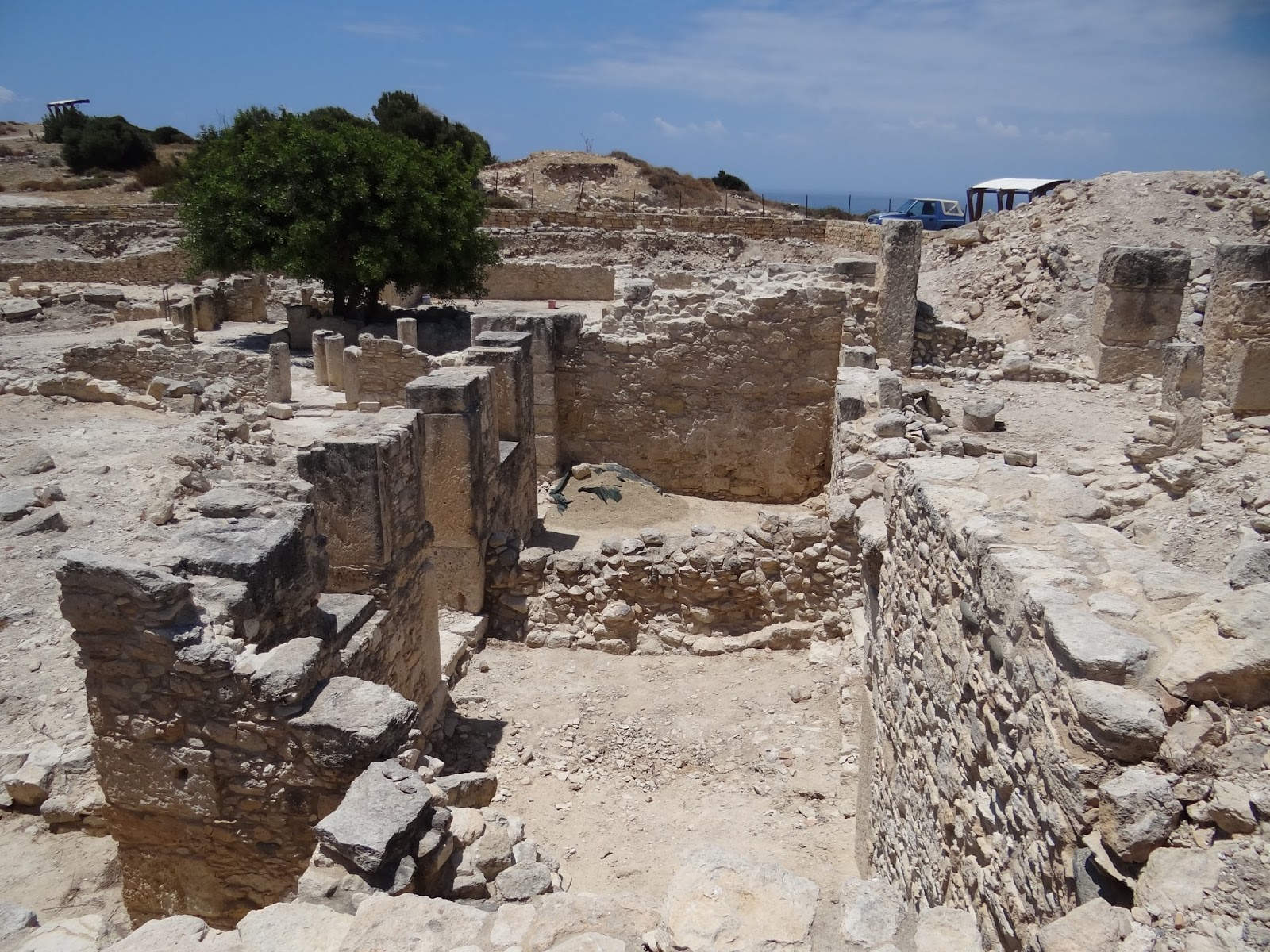 After about 3 hours of exploring, we decided to drive to the small village that is nearby. It was famous for its very narrow streets and said to be one of the oldest towns in Cyprus. There we went to the restaurant and put something into our stomaches. I got myself fresh orange juice (they are very popular there) and chicken salad. It was very nice and delicious. 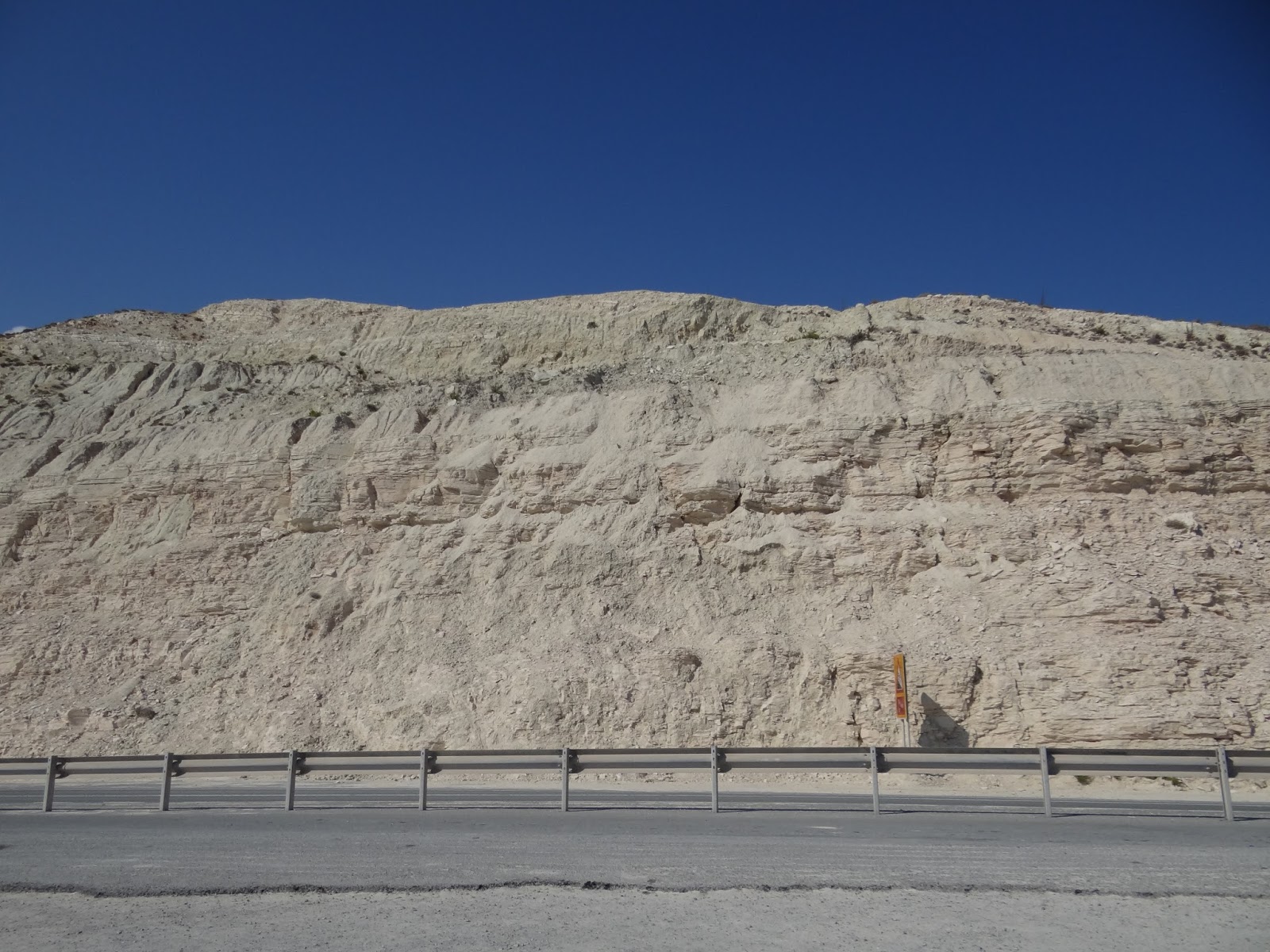 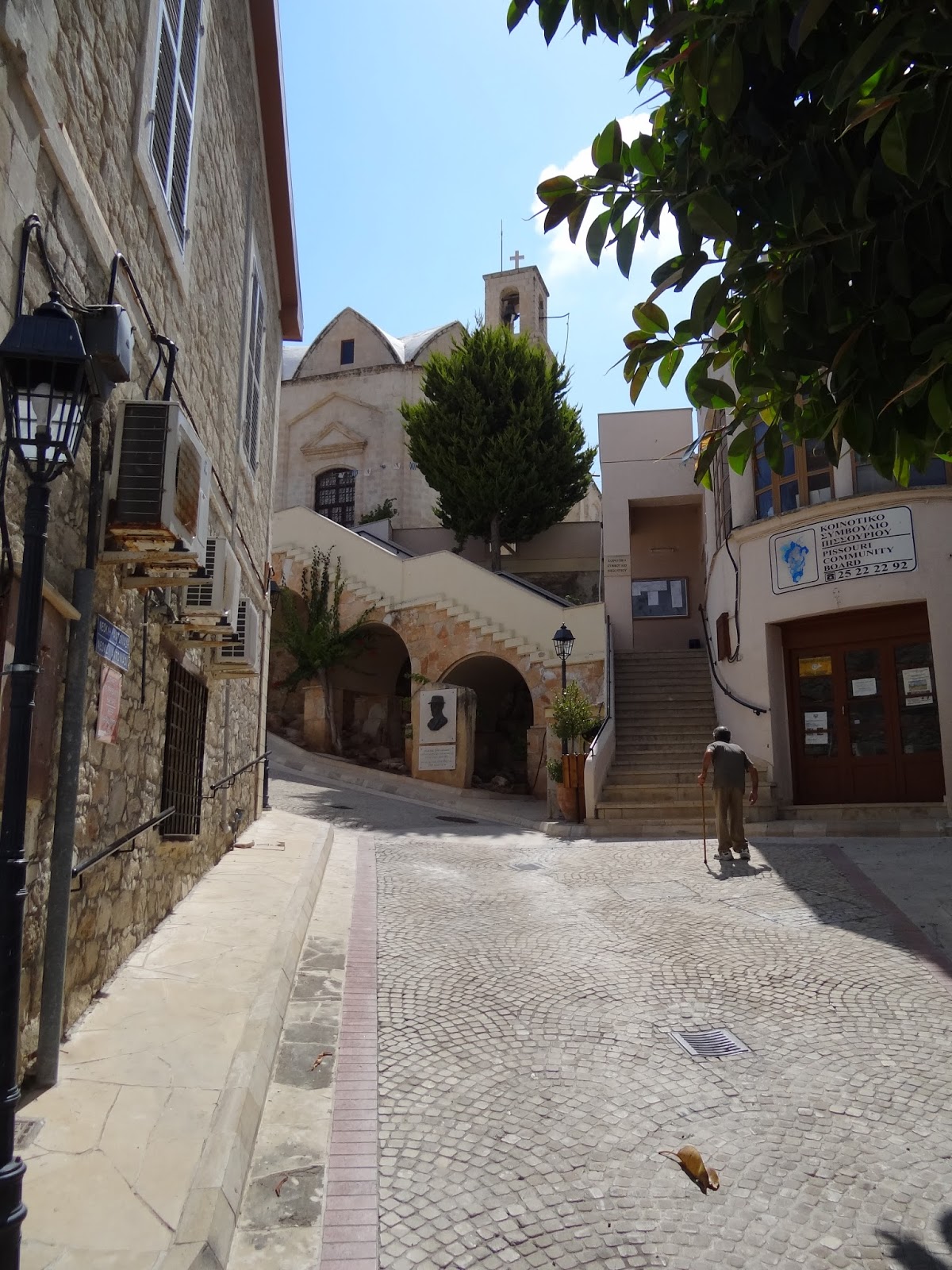 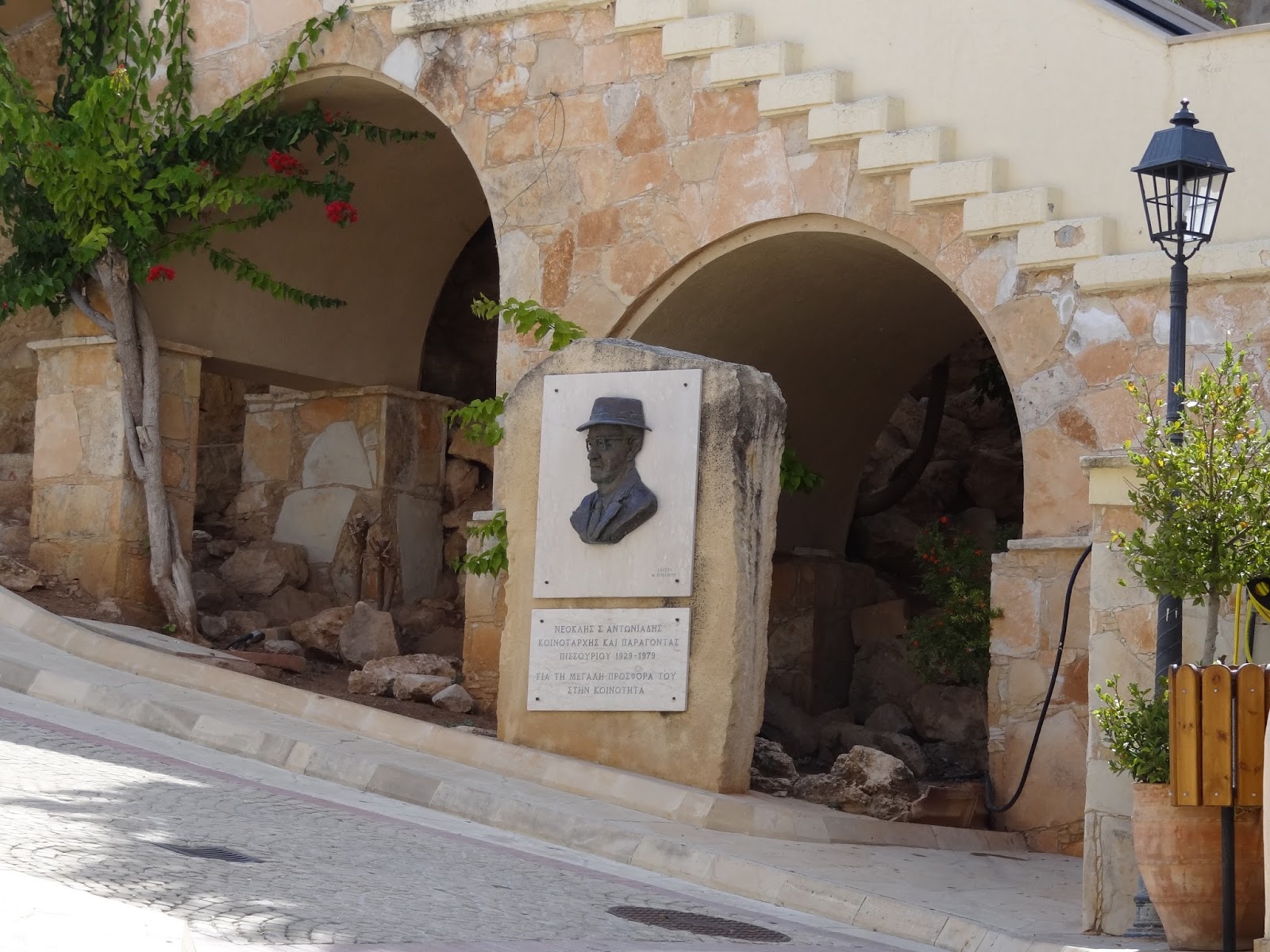 After exploring the village, we decided to drive back home. Then we got back, we packed our bathing suits, snacks with food and drove to Coral Bay. It’s a blue flag beach with lots of people in there. I haven’t seen so many people on the beach in Cyprus during our trip. We rented sun beds and umbrellas as well and just enjoyed the water and the sun. 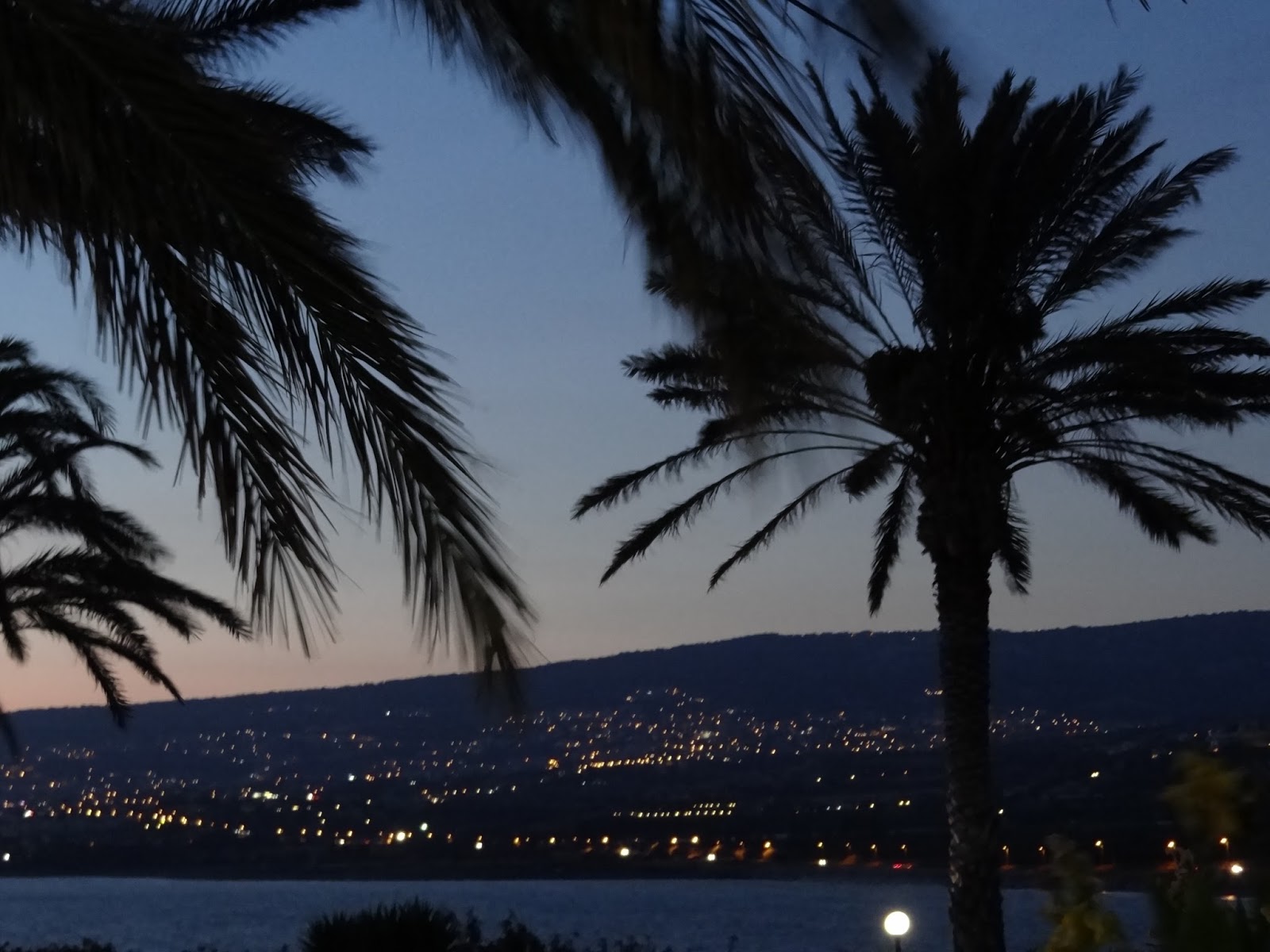 View that we saw every night after sunset

And that’s how our second to last day went by. On our last day, we started packing, went to get souvenirs, lots of local candies, spices and just relaxed by the sea. We went to sleep very early on our last day as we had to get up very early the next day for our flight. We had to get up at 3:30 a.m. (yes, it is ridiculous time, I wasn’t very happy about that). Plus, all of us had no sleep that night – there was loud music playing from the bar somewhere near our hotel and after it stopped we still couldn’t sleep. I don’t know what was going on, but we blamed full moon for our lack of sleep (more like no sleep). At 4 a.m. driver picked us up from our hotel. And at around 10:30 a.m. we were back in Lithuania. Aaaaand, I spent the next day sleeping because I had no sleep what so ever.

That’s how my trip to Cyprus went. But don’t worry, one more post is going up soon about Cyprus, so it’s not over yet.

What was the most interesting day for you from my trip? Have you ever had such an early flight?

Read about previous days if you haven’t yet:

A Day in Cyprus | Aphrodite’s Island | Part IV (click it!)

Read about the next day here: