People don’t lie who say that Danish people are the World’s happiest people. Everyone we met and saw in Denmark was super friendly and helpful, plus they always were smiling. This fact alone should make you want to visit Copenhagen, the capital of Denmark.

But I know it might not be enough, so I’m about to show you how amazing Copenhagen really is.

I went to Copenhagen with two good friends at the end of November. We decided to have a little city break in the middle of our uni semester. So we bought the tickets which cost us 23 EUR each in total (Kaunas – Copenhagen – Kaunas). We had only 24 hours in this beautiful city, so we didn’t waste any time and started exploring it as soon as we exited the airport.

Fun fact: it took about 1 hour for us to actually exit the airport. No, we didn’t have luggage but we somehow managed to get lost in it. It’s the biggest airport I’ve ever been to and it’s confusing. I felt like in a huge shopping mall.

We arrived at Copenhagen at 6-something in the morning, so after our short getting lost in the airport scene, we stepped our feet outside around 7 in the morning.

The first thing we did was buy a City Pass which is a transport card. We bought a 24-hour card for 80 DKK (~10 EUR) each which was the best option for us if we wanted to make it a budget trip. You can also buy a 72-hour card as well if you’re in the city for a longer time.

The best thing about this card is that you can travel by train, bus, metro and a harbour bus in all 1-4 zones which includes all the city centre with all the main attractions. So it fulfilled all our travel needs and it was super cheap compared to what we would pay if we bought separate one trip tickets.

You can buy City Pass and other transport tickets at the airport and every main transport station.

To get to the city centre we took metro M2 and we got there in 20 minutes. From there we started walking towards the famous The Little Mermaid statue. We decided to make it our first stop as it was still early in the morning, so there wouldn’t be too many people. Apparently, in the day it’s hard to even come close to it because of all the people who want to take a photo beside it.

I don’t know what the fuss about this statue is but I took a photo of it. I think it’s considered a symbol of Copenhagen.

Next, we walked to the old town and started taking photos of everything. We saw Frederik’s Chruch which is often called “Marble Church”. It’s a real beauty, sadly the area around it was being reconstructed, so we couldn’t take a better look at it and a photo.

At the opposite side of the church, there was Amalienburg – the home of the Danish royal family. Sadly, we didn’t see the queen but we witnessed a march of royal guards which was pretty exciting as well.

After that, we walked around the famous Nyhavn, a canal with very pretty and colourful buildings and a lot of restaurants. There was a Christmas market happening as well. It’s safe to say that we took thousands of photos there. 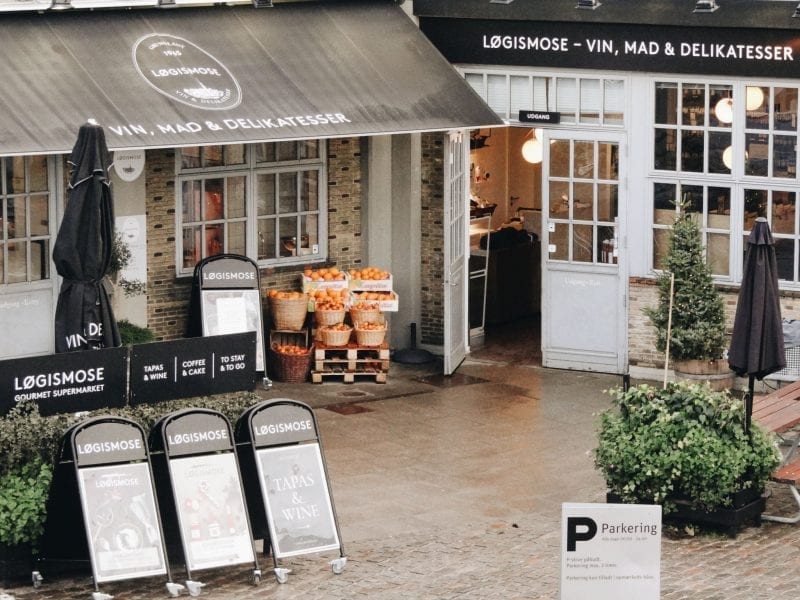 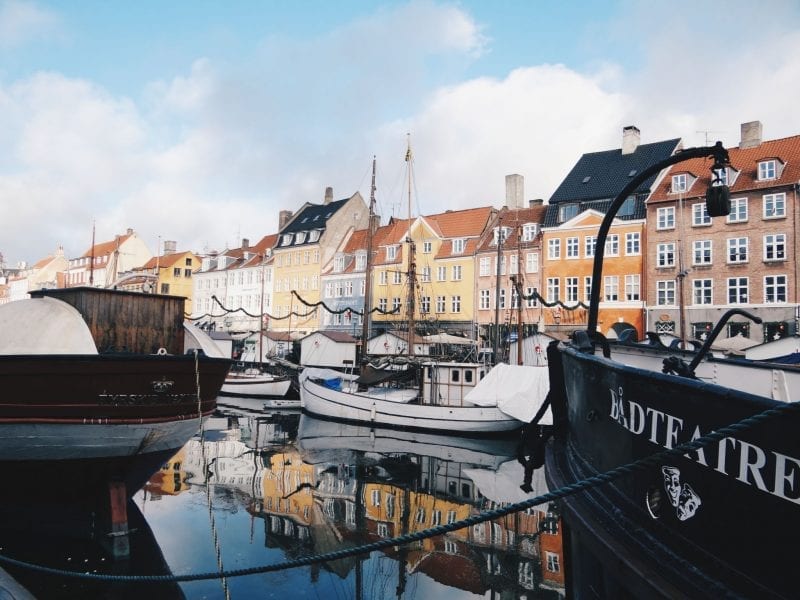 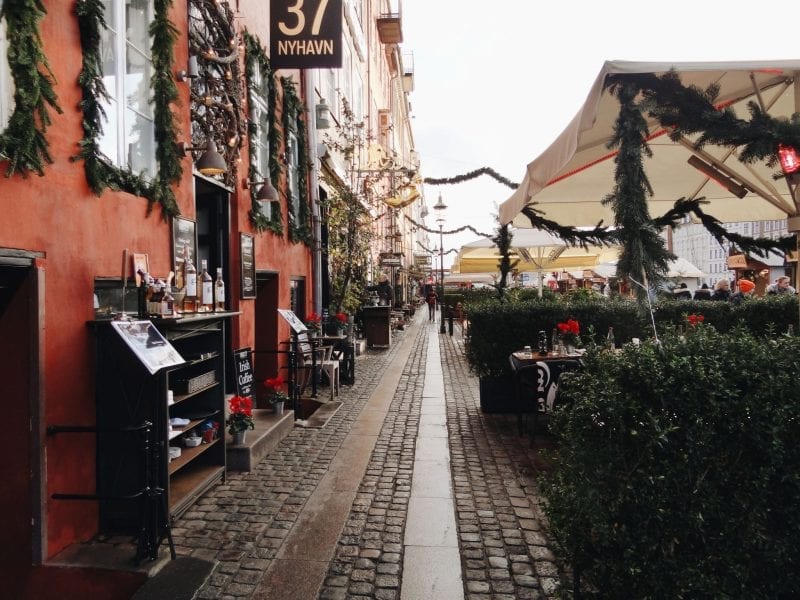 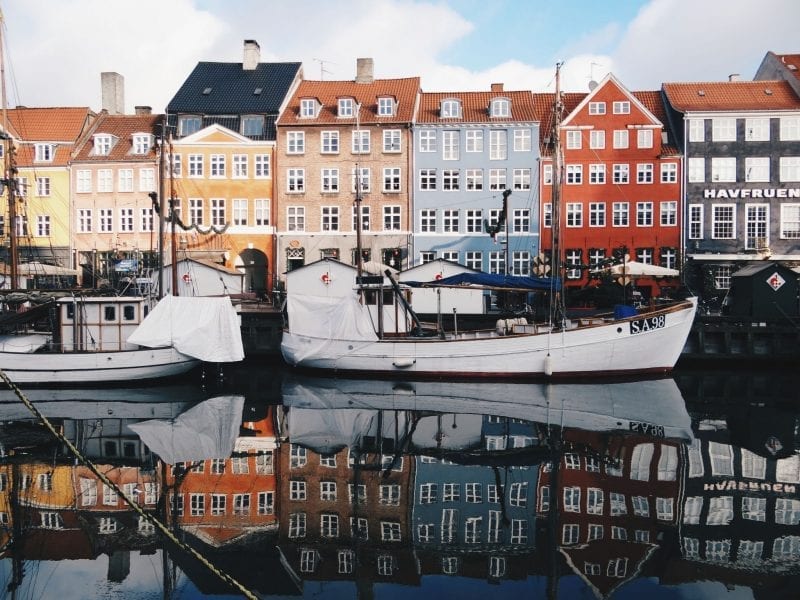 On the way to Christiansborg Palace, we saw The Royal Theater and a lot of other architectural wonders. Christiansborg is the best place if you want to get a free and the best view of Copengahen. On very sunny and clear day, you can even see Malmo, Sweden and a bridge that connects these two cities.

The view from the top was simply gorgeous. I couldn’t get enough of it. I definitely recommend it. You could see every attraction from there.

Later we decided to visit The Royal Library which is the biggest public library with free wifi which was so badly needed at that moment. We stayed in the library for few minutes to warm up as it was a bit chilly outside and then decided to go eat somewhere because we were starving after all the walking. 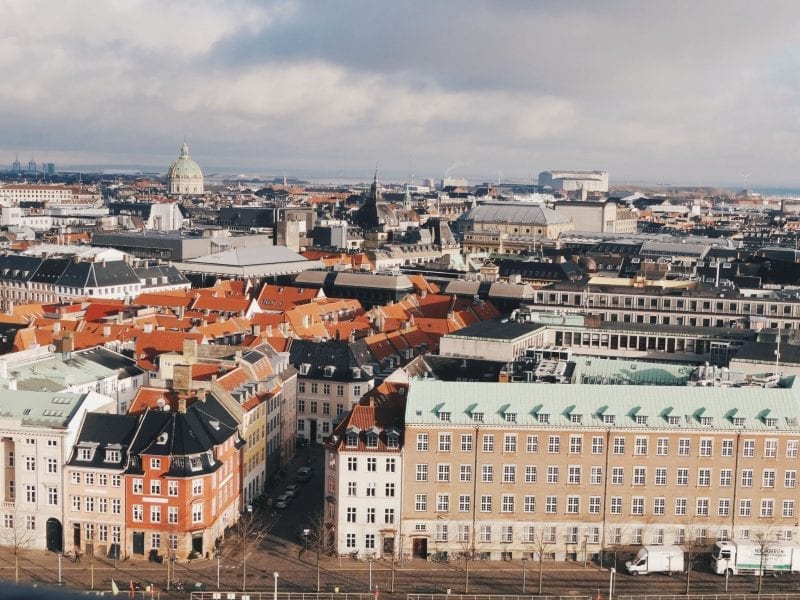 We took a harbour bus from the stop which was close to the library and sailed to the Opera stop. On the way there we could enjoy the view of the city from the canal which was nice. The bus wasn’t swaying too much, so for all of you who have seasickness, you’re safe (one of my friends has it – she was freaking it out first but then she started enjoying it, I think).

Anyways, we were on the other side of the city and we decided to have a meal at Street Food market which is on Paper Island. It’s a lovely indoor food court where you can find all kinds of food – Chinese, Korean, Mexican, vegan and so on. On a warm day, you can even enjoy your food while sitting outside near the waterfront.

I definitely recommend duck fat fries from Copper & Wheat that were divine. If you want to taste the best cheesecake in the world, you definitely need to find Cheesecaken stall and get yourself a fresh berry cheesecake or Oreo one. Though berry ones was a tad bit better than Oreo.

After sitting in Street Food market for around 2 hours and enjoying the food like real Danish people, we decided that it’s time to continue our exploration of the city. So we stepped our foot into Christiania, a freetown, a district of weed in other words.

It’s a self-proclaimed autonomous anarchist district. It’s very colourful and interesting neighbourhood in Copenhagen, to say the least. You can actually buy weed, hash (though it’s illegal) easily there from the kiosks that are scattered around. There are a lot of art galleries, homemade houses and so on.

I wouldn’t say that I was feeling completely safe there, there are a lot of people that don’t look too inviting. Also, the first thing that I noticed when I stepped in Christiania, was a strong mixed smell of weed and other ‘smokable greeneries’. Interest experience but we didn’t wander too much there.

Also, it’s recommended that you don’t photograph or film anything there or you might find some trouble there.

After Christiania, we took a bus back to the other side of the Copenhagen and visited Nikolaj Kunsthal which is a contemporary art museum in the middle of an old church. Then we walked around Stroget, the biggest shopping street you can find. We stopped at few Christmas markets while walking and enjoyed a glass of gluckwein.

Finally, we reached the city hall and then the beautiful Tivoli and its gardens. However, we were tight on budget, so we didn’t visit Tivoli. We only observed it from the outside and made plans to someday come back just for the Tivoli and that god sent cheesecake from Street Food.

We walked back the Stroget street and sat on the main fountain there while listening to a street artist perform the most beautiful songs.

You can also explore the city by booking a free walking tour of Copenhagen here. 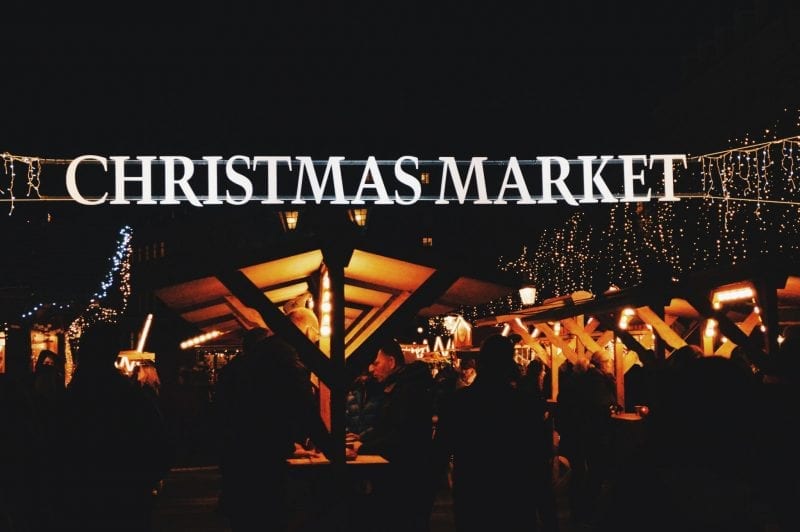 Sleeping in the airport

Now since we were on a budget (hello, student life!), we naturally didn’t book a hostel/hotel. It’s very expensive in Copenhagen if you didn’t know that already. So we decided to sleep in the airport. A lot of travellers do that, so we went with it.

It was a pain, to put it simply. The chairs there have dividers, so it’s impossible to sleep comfortably. So I didn’t catch much sleep and my back was officially broke. We ate breakfast at the airport, bought souvenirs, gifts and then waited for our flight in the more comfortable area.

All in all, it was a fantastic trip! I loved Copenhagen and how beautiful, friendly it was. I didn’t enjoy the airport life but other than that, I definitely recommend visiting the city.

My friend was filming a bit, so she made this short video about our trip. You can check it out if you’d like. Don’t forget to turn on subtitles  😉

You can now read this article offline and get GPS-guided travel directions to the attractions featured in this article by downloading the GPSmyCity app on iTunes App Store or Google Play. Check out the article here!

Have you ever been to Copenhagen?

What was the best city break for you?