I attended a music festival in the beginning of August for the first time ever and let’s just say that I was blown away! It was an experience for sure and I just can’t miss an opportunity to blog about it, can I? Anyways, to give you some background, I went to Granatos Live 2016 music festival in Lithuania that was held for 3 days. Lots of camping involved, good music and even more amazing memories. From all this experience I learned quite a lot about myself and about festivals in general. So, I thought way not share few of them with you? Here are 10 things I learned from my first ever music festival:

1. They leave you broke as hell

And I won’t even try to lie or say that it’s not that bad because it is BAD. You won’t only pay tons of money for the tickets and things like snacks, water for the fest itself, but you also will pay a ridiculous amount like 3 euros for a little cup of cider or beer. I’m not even talking about other beverages and actual food that you’ll need if you aren’t fond of the idea of staying hungry for three days.

2. 3 a.m. picnic with your new made friends is actually a pretty damn good idea

Camping in a huge area is bound to end with you meeting lots of new people and maybe even becoming great friends with them. We had pretty great neighbours who are living in London at the moment and we had an incredible time chatting at night near our tents and wandering the whole area.

3. It turns out that I would probably survive few days on an unknown island

I always was a bit wary of spiders, bugs and all those creepy things but turns out that I can take them out of the tent with my bare hands and not feel super disgusted. My friend on the other hand… she would run like Bolt if she saw one.

4. There is nothing a pack of good wet wipes can’t fix

And I am serious! Wet wipes saved us. You can use them to clean your face, hands, take mud off your legs, shoes and so on. So freaking useful to carry a pack everywhere!

5. Sneaking in booze is so freaking easy!

It’s not surprising actually when you think about it. People will do anything to sneak in their own drinks just so they wouldn’t need to pay billions in the festivals. And even if the security is checking everyone and all the bags, they still manage to miss a lot of it. So if you want cheap drinks, be creative! 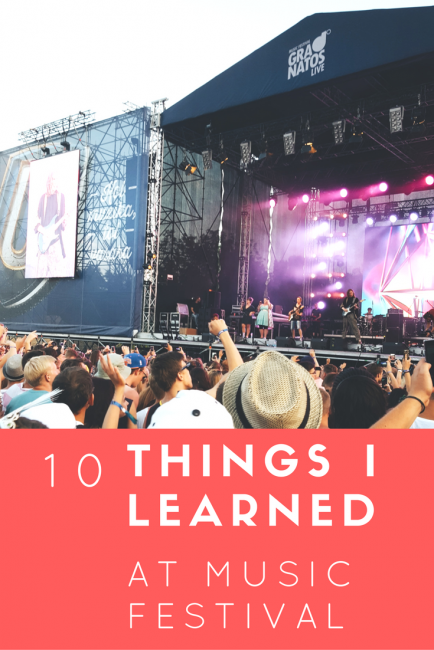 6. I am really not a fan of electronic music

Something I already knew but after the weekend in this festival, I was 100% sure that it’s not my kind of music. I don’t enjoy it, it hurts my ears and let’s just say I become a moody mess real quick.

Even if you are wearing slippers, sweatpants and a long cardigan that looks like a bathrobe. 100% tested out by yours truly! People dress up as Pikachu, Spiderman, Spongebob and in even more ridiculous costumes. It’s festival, after all, the place where you can get as crazy as you want and people won’t judge you.

8. People are weird and I love it

This one is quite similar to the point I made above but I really felt the need to talk more about this. People not only dress up weirdly, in a good way of course, but they also bring ridiculous things to festivals. Like there was one guy who was dancing with a skeleton in the middle of the concert! A skeleton. Why would you even bring a skeleton? I don’t have a single clue but I love it. It shows that people are still being unique and weird, there are still people who don’t care about looks and all that crap that seems to be getting out of hand, especially in schools.

9. My name is strange but lovable?

Haha, this is a fun story. There was a guy who was clearly more than tipsy and he came to us while we were having that wonderful 3 a.m. picnic with our tent neighbours. This guy kept saying how awesome we are and when he found out my name, he was very surprised. I don’t even know how to describe it. He kept saying how fantastic it is and he even asked me to do a hand heart with him. You know that Tumblr thing where one person does half of the heart form and other does the other? Yeah, we did it and he said that our hands fit perfectly in that heart shape. I was laughing hysterically after that one. Oh God, surely will remember this for a long time.

10. I am in love with festivals

How could I not? Festivals are something I recommend all of you to do at least once. They might not be your cup of tea if you not a huge fan of music and weirdness but it surely is mine. I had so much fun and made so many good and funny memories. Everything was simply amazing and I would love to do it all over again. Hopefully, I’ll get to attend to even more festivals next summer.

What about you, have you ever been to a music festival?

If yes, what have you learned from them?

If no, are you planning to?