Skip to Content
Home collaboration Collab with Cynical Duchess: We stitched a story

So, I did a collab with the lovely Batsheva from Cynical Duchess. First, you should really give this girl and her blog a read since she writes unique and wonderful posts that make you not only think a lot but laugh as well. And I seriously adore her and her blog. She has this fun and a bit witty personality that makes you want to read all of her posts in one go. I am not even lying! Also, her latest posts are about graffiti in LA and streets of New York which have to be my favourite so far. You just have to go over to her blog to find out what I am talking about, trust me, you won’t be disappointed! Also, I couldn’t be happier that blogging made it possible for me to meet new people all over the world that I can proudly call friends. It is still unreal at times and I am really grateful for such lovely readers who support me and encourage me to do better. Now let’s get to the collab before it turns out to a sappy long post, shall we?

For you, our dear readers, I and Batsheva decided to create two stories from the photos. Basically, I sent a photo of mine to Batsheva and she had to create a story about what she sees in it and then I had to finish it. Same goes with her photo but then I start writing and this lovely lady finishes it. That way we both create 2 completely different and unique stories. I hope you enjoy this collaboration since we had a lot of fun creating stories and writing them out 🙂

Don’t forget to head over to Cynical Duchess and read the next story (CLIK CLICK!) which Batsheva started and I finished. It’s super lovely and has a nice twist to it. Say hi from me! And please be kind and let us know what you think of this collab. 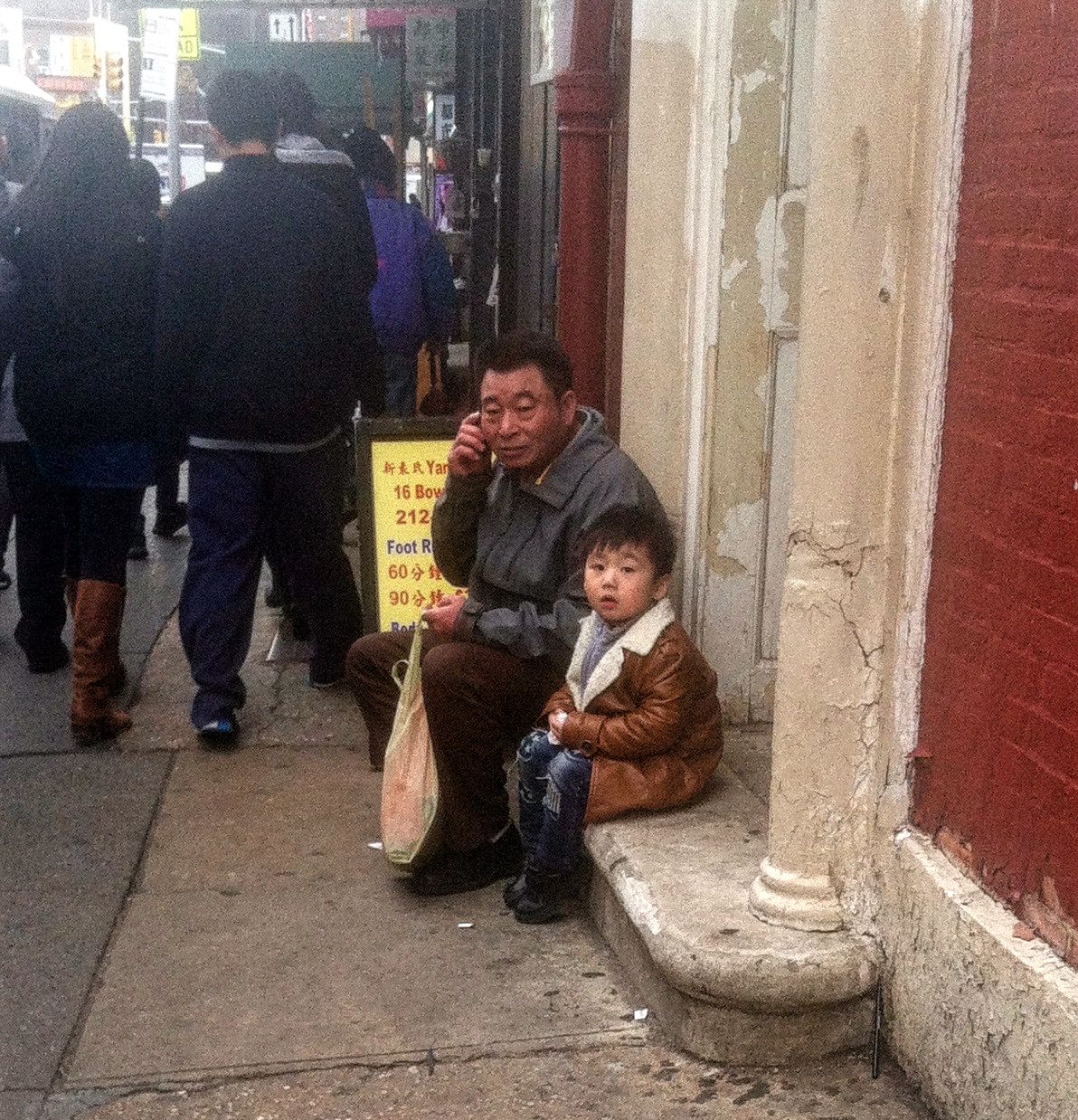 It was an early morning in NYC streets. People rushing by, streets full of workers and daily routine. Nothing too extraordinary for a big city like this one full of buildings that reach the sky and incredible artwork on the walls. No one really stops for a minute and tries to take it in. They only rush, run, rush and run. It’s like a constant cycle of fast pace, different faces that change so quickly that you can’t even capture one’s hair colour or eyes. Are they sad? Are they happy? Do they suffer inside while maintaining a big smile on their face?

A man with a little boy who are sitting on the steps of an old rent house stand out the most in this grey and fast paced crowd. It’s not their race that makes them so outstanding, it’s how they aren’t as fast paced as others. They are sitting on the steps and it looks like they are waiting for something. The boy no older than 4 years looks captured by something. Is it the usuality of NYC? Or is it the woman who is capturing the moment with her DSLR camera? One for sure, he stopped and he took it in. He took a city full of rush and people in and he observed it. However, the father of this wonderful kid doesn’t have it easy. He cannot observe the surroundings, he cannot do that because of a deep worry in his face. The family has migrated from a very poor country to the biggest city in the United States in order to find a better life. But looks like they only went from poor to poorer.

A man is trying to reach out to somebody, probably a mother of this cute little child, for a help. They got lost in this city of broken dreams and fallen angels. No one seems to be bothered to give a helping hand to these two in need. No one wants or likes to stop and break their so excellently perfected fast pace. The boy doesn’t understand the situation he is in. He doesn’t understand that he may be homeless today, he doesn’t even know that he can be hungry and cold in this harsh huge city. The man does. He knows about the bad that could happen if nobody helps them if he won’t reach out to someone.

“Excuse me” A voice so silent and oh so magical interrupted deep in the thoughts man and his little son.

It was a woman—no—a girl, maybe about sixteen years of age. The father and son both looked up in surprise. The boy’s father had a look of frozen bewilderment patched onto his face, his cell phone hanging limply by his ear. The boy, however, studied the girl curiously, as if he had never seen another human up close before. No one usually looked in their direction, though they sat on the same stoop, every day, waiting for a job to come meandering into his father’s empty fingers—waiting for something different to happen. People were usually just a blur of empty faces. Sometimes the faces would hurriedly cast some pennies at their feet, sometimes it was spit. The boy usually liked to watch as the spit found its way into the crevices of the sidewalk—as the whitish glob slowly spread itself out—snail-like— until the weak Manhattan sun turned it into nothing more than another stain on the concrete; it was a good way to pass the time. Yet most faces just careened past their stop every day, their eyes studiously averted, looking anywhere but at them. The boy fixed his eyes toward the girl once more.

She wore her messy brown curls pulled up into a loose braid while a pair of thick purple glasses perched solemnly on a crooked, slightly broken looking nose. Her white coat was translucent against her cocoa skin. The girl nervously ran her fingers through her bangs as she took a hesitant step closer to the boy and his father. She cleared her throat.

“I—I saw you from across the street.” She looked down at the sidewalk, a hint of red creeping up her cheeks. “I know this sounds kinda really weird, and I know you’re probably busy or something and I’m probably bothering you but—“ she took a breath”— I thought you looked hungry.” There was a beat of silence. The boy’s father slowly put his cell phone down onto his lap and drew his breath inward, so silent, only the passing breeze could hear. “I know—what it feels like, to be hungry.” The girl said haltingly, her voice coming out in pieces as if she couldn’t speak those words altogether.

She nervously hitched her faded denim tote bag over her shoulder. Suddenly, she reached into her bag and started rummaging through the unseen objects within the denim tote, her arm burrowing deeper and deeper into the fabric, looking for a something. Then her eyes lit up. The girl quickly pulled her arm out of her tote bag, her fingers triumphantly clutching a bag of sandwiches.

The boy felt the familiar dulled pang of emptiness in his stomach. Another reminder to his brain, letting him know, in case he may have forgotten, that there wasn’t anything in there. He felt the muscles in the back of his tongue tense up, preparing for the onslaught of his watering mouth. He looked back at the girl solemnly, his eyes dulled from too much pain.

The girl smiled quickly, sheepishly, her hand creeping back to her unruly bangs. “My mom made extra today, I could never finish all this by myself.” She laughed as she said it as if she could cover her implicated offer with a joke; as if she could laugh it all away. Suddenly, slowly, she lowered herself onto the stoop next to the boy and his father. Her denim tote bag fell next to her feet with a thud. She didn’t notice their silent stares as she busily started ripping the sandwiches in half. The girl stuffed one of the sandwiches in her mouth so that she couldn’t speak. She stretched out her hands to the father and son, her hands filled with sandwiches. The boy turned to his father, a question written on his face; his father nodded—once— almost in disbelief. Together, they both reached out and took a sandwich from the girl’s waiting fingers. Then, in unison, the three of them leaned back against the red brick wall behind them and devoured their sandwiches.

The only sound to be heard was their concentrated munching, against the backdrop of the angry horns and blaring chatter of the busy Manhattan street. Together they watched as the people strode briskly past them, unaware of the little story taking place at their feet. Together they took in the bustling street, the sweet smell of evening and smoke that one could only ever smell when one chose to notice. Together they listened to the faraway chatter, the unconnected voices that filled up the edges of life. Together they sat, all three of them, and watched the faces pass them by.


What do you think of our little stories?